As a passionate amateur footballer Marty Trifonova is no stranger to Ellen White’s illustrious career. She has seen Ellen – a star striker for both Manchester City and the Lionesses – in action on several occasions.

Marty said, “I think Ellen is a great player. I’ve seen her play quite a few times including the World Cup, which was really cool, and the Women’s FA Cup final.” 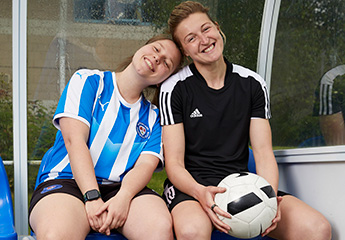 Marty, 28, who plays her football for one of the women’s teams at National Lottery-supported Actonians FC, never expected to meet Ellen, of course. But that’s exactly what happened when the Lioness and the local legend kicked a ball around as part of a shoot in Manchester for a new video promoting National Lottery players’ support for heroes of tomorrow.

Marty is still buzzing from her encounter with the 33-year-old England International. Ellen has scored an incredible 50 goals in 105 games since her debut against Australia in 2010 and is set to be a key player in the Lionesses’ UEFA Women’s Euro 2022 campaign this summer.

Marty said, “Meeting her was fantastic. It was great to watch her dribbling and get some training tips from her. We were talking about what an average day is like for her and some of the drills she uses.” 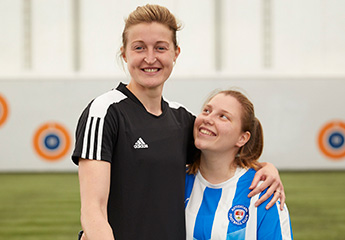 Like Marty, Ellen has benefited from funding made possible by National Lottery players. For 2 years, she was supported by the Talented Athlete Scholarship Scheme (TASS), a National Lottery funded partnership identifying and nurturing promising young players in 32 sports. The scheme helps stars-in-waiting like Ellen get the best from their sporting and academic careers without having to choose between the two.

Marty has faced a few hurdles of her own when it comes to football. Growing up in Bulgaria her mother – who had a “traditional Eastern European outlook” – viewed sports, with the possible exception of tennis, as unsuitable pastimes for a woman.

Marty had never played football or even watched a match when, at the age of 7, she moved to London with her mother. When developed a taste for kicking a ball around with a new set of friends, her mother was not impressed.

Undeterred, Marty continued to play through her school and university years. When she landed a job with Ealing Council in West London, she started looking for a local women’s team and was introduced to National Lottery-funded Actonians LFC. 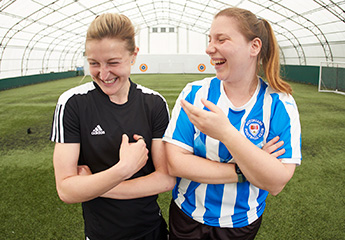 That was 4 years ago. Marty, now plays as a winger with one of Actonians LFC’s 3 teams.

She said, “It’s incredible. I have the best teammates that anyone could ask for. I feel I have a support network outside the club. We can hang out together, go to each other’s houses or go to parties. I’ve literally invited the entire team to my place to listen to music and hang out.”

Her mother’s attitude to football has softened over the years (helped no doubt by her marriage to Marty’s English stepdad, a devoted Arsenal supporter). But when she saw photographs of Marty with Ellen taken at the National Lottery video shoot, her acceptance turned to genuine pride.

Marty said, “Mum was really positive when I showed her some of the pictures, she was really quite proud. In fact, she told my grandma about them and she called me from Bulgaria to congratulate me.”

You can watch the video of Marty and Ellen below.

Thanks to National Lottery players, over £50MMillion of funding has been raised for women’s football over the past 10 years.