As a devoted member of parkrun, Lorraine Isaac thinks nothing of running 5km in her local park each Saturday. But when she met Paralympic sprinter Jonnie Peacock as part of a video shoot for The National Lottery, the gold medal winner made a surprising admission. 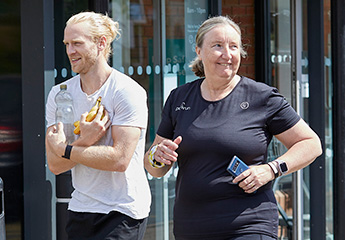 She added, “He’s just a really nice guy – down to earth and happy to chat. A few people stopped him for selfies and he was just lovely.”

For Lorraine, running is a family affair involving 3 generations of her family. Her 82-year-old father Bob, her husband David and her daughter Amie, regularly accompany her to parkrun events near their home in Leicestershire. 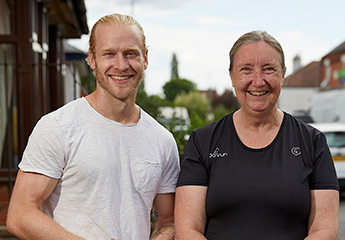 Lorraine, 55, was first off the blocks, running (or rather running and walking) her first parkrun in 2014. The retired business analyst said, “I’d lost some weight and wanted to keep it off. I knew I couldn’t run a full 5km, so I tried parkrun and never looked back.”

Parkrun, for the uninitiated, is a free weekly community event held in parks and open spaces around the world. The initiative, which has been supported with £3.6MMillion of funding over the past 8 years thanks to National Lottery players, is a positive, welcoming and inclusive experience. There is no time limit to complete the course and no one finishes last because volunteer ‘tail walkers’ ensure no one is left behind or crosses the line last. It doesn’t matter if you walk, jog, run, volunteer or spectate – the emphasis is on having fun, getting fitter and making friends.

Lorraine’s involvement in parkrun has deepened considerably since she took part in her first event. She has 140 runs under her belt and is now one of the run directors at the 8-month old parkrun at Watermead Country Park north of Leicester. 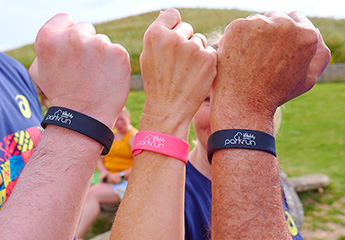 Daughter Amie, 23, was a reluctant participant at first, but parkrun has become an important part of her life. She was still a teenager when Lorraine started taking her – “I had to drag her there crying” – but she has become a passionate runner and, like her mother, is now a run director at Watermead Country Park.

As well as boosting her fitness – Amie now runs the 5km parkrun course in an impressive 26 minutes – her participation has helped her confidence enormously. Lorraine said, “When you’re in the run director role you have to talk to the runners and speaking in public is not an easy thing. She fell into it and made it her own; she can grab their attention.

Lorraine added, “The confidence Amie has gained through parkrun has transferred to other parts of her life. She was quite insular when she was doing her law degree, but she’s gone on to do a masters and now has her first legal job. I’ve seen her blossom into a confident young lady from a very anxious, very angsty teenager.”

A more recent parkrun recruit is Lorraine’s father, Bob. Lorraine said, “We lost my mum to Covid and dad was very lonely on his own. I told him to come to parkrun – to just come along and watch. He grumbled at first, but agreed to be a volunteer. People ran past and said ‘thank you marshal’ and all of sudden he was talking to people.”

Bob has become friends with a group of runners in their 80s and regularly joins the parkrun gang when it goes to a local pub for breakfast after the Saturday morning run. Lorraine said, “He really enjoys it. It’s given him a reason to look forward to the weekend."