Romance and the movies go together like Harry and Sally, Rose and Jack and Baby and Johnny. But did you know that some of the silver screen’s best heart-tugging flicks have been made with the help of funding from The National Lottery? Here’s a list of 5 swoon-tastic National Lottery-funded features for you to enjoy on Valentine’s Day (or any other day of the year where a little romance is required). We’ve given each film a swoon rating from 1 to 10 (where 10 is the cinematic equivalent of David Lean’s Brief Encounter, a British film made in 1945 that is often voted the most romantic of all time). 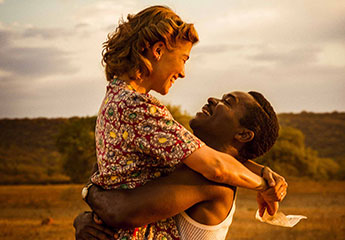 Amma Asante’s romantic drama is based on a true story: the lives of Seretse Khama, the King of Botswana and his wife Ruth Williams, a London office worker.

Their union, in 1947, was wildly controversial and opposed by both the British government and neighbouring South Africa, where the policy of apartheid had recently been introduced. But Seretse (played by David Oyelowo) and Ruth (Rosamund Pike) never wavered in their devotion to each other and their fierce determination to improve the lives of Botswana’s people. 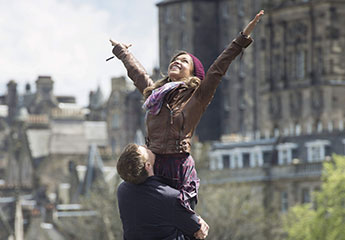 A romantic musical based on the songs of Scottish identical twins The Proclaimers? Yes, it’s a daring idea, but director Dexter Fletcher turns it into a joyous affair.

The plot involves two young soldiers who are discharged after a tour of Afghanistan and return home to Edinburgh to start life as civilians. Ally (Kevin Guthrie) already has a girlfriend called Liz (Freya Mavor), while best mate Davy falls for Liz’s English friend Yvonne (Antonia Thomas). The film’s climax – to the tune of I’m Gonna Be (500 Miles) – is movie romance at its finest.

You can understand why director Francis Lee’s debut feature earned comparisons to Oscar-winner Brokeback Mountain. The tale of two workers on a farm in Yorkshire who form an unexpected bond during lambing season is captivating and broodingly beautiful. Josh O’Connor (seen more recently as Prince Charles in The Crown) plays the local lad, while Alec Secareanu is the Romanian migrant worker who captures his heart.

Critics praised the chemistry between Coel and Kene and the movie manages to juggle the harsh realities of urban life with some heart-stopping romance.

Directed by Andy Serkis (yes, Gollum in the Lord of the Rings movies), Breathe is a film about the kind of love that endures and overcomes hardship.

Breathe has a star-packed cast headed by Andrew Garfield and Claire Foy and is based on a true story about a man (Garfield) who is paralysed by polio in Africa in 1958. His wife (Foy) brings him home to the UK where her “devotion and witty determination” transcend his disability. You’ll need an extra packet of tissues for this one.