Anne is the millionaire mother of invention

In October 2015 Anne Canavan, a Derry-based inventor and mum of 4, was working a variety of jobs.

Anne said, “I remember taking my friend out shopping, as she had a broken leg and was suffering from cabin fever. I’d bought a ticket for the Tuesday night EuroMillions draw and then, having found a couple of quid in my pocket, I thought I’d buy one for the Friday night draw too. Little did I know this slip of paper that I carried around so casually in my handbag from Tuesday to Friday was going to be worth so much money!” 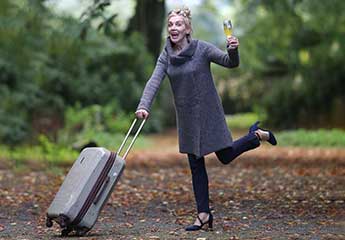 Thinking about her £1MMillion win on that lucky October day 5 years ago, Anne said, “It’s really funny when I look back, as normally I would buy a ticket and not check it for ages, or maybe wait until I have 3 or 4 and check them all in one go. But on this particular Friday night I remember feeling an urge to check my ticket as I was getting ready for bed at around 1:00am. I had turned off my laptop but I switched it back on, checked the results and went… ‘WHAT!!!???’ I checked it 3 or 4 times but deep down I knew that I had won.”

The win has helped Anne to develop her inventions, including the Snotblot – a wristband that stores tissues within handy reach to stop runny noses becoming a messy issue for kids and adults. Anne said, “Snotblot is now one of 26 different products that I’m currently working on, all at varying stages of development. From the age of 19 or 20, I’ve always been fascinated by invention and innovation, and now I am able to develop my ideas.”

It’s not just inventing that Anne is passionate about; she also loves writing. She said, “Something I’ve always enjoyed since I was a kid is storytelling. So, I’ve written a series of 15 Snotblot children’s stories – which are a bit like a modern-day version of the old Mister Men books – and I’m now working on a big fantasy story that I like to call my ‘Netflix blockbuster’.”

Writing has also given Anne a chance to help others. She contributed to another book and is donating money from the pre-sales to The Kevin Bell Repatriation Trust which is run by fellow National Lottery winners Colin and Eithne Bell, who Anne met thanks to her win. She said, “It’s funny how life works sometimes. I would never have met Colin and Eithne had we not been lucky enough to win the lottery.”

Anne’s entrepreneurial spirit and creativity are inspiring, so we sat down with her to find out about the 5 years since she won and where she gets her clever product ideas.