Mark Francis, a devoted rugby fan from Swansea, is looking forward to watching his favourite teams score tries at stadiums across the world, after winning £1MMillion in the EuroMillions UK Millionaire Maker draw. 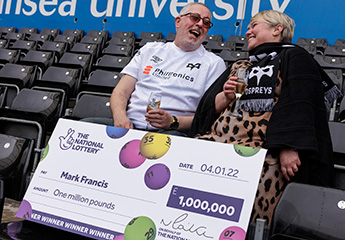 The 49-year-old delivery driver hopes to use some of his winnings to watch the Ospreys, Wales and the British and Irish Lions on their foreign tours as soon as travel restrictions ease.

Mark and his partner Helen, 50, a carer for Swansea Council, celebrated their win at the Ospreys’ home ground, the Swansea.com Stadium. Mark said, “As a season ticket holder, I try to get down to the stadium to support the boys whenever they play at home. I juggle shifts if I have to, I wouldn’t want to miss a match.”

Not all Mark’s travel plans involve rugby. Later this year he and Helen will be heading to Greece to celebrate his 50th birthday. He said, “We’d actually booked the holiday before the win. It’s such a treat and now we’re really looking forward to it.”

Mark said, “I couldn’t believe it. I still can’t, it’s been such a whirlwind. When the money popped into my account it was bizarre seeing all those zeros in there, especially since I had Covid and couldn’t even go out and celebrate the win.”

Helen is excited about the win, but is keeping her feet firmly on the ground. Mark said, “She has said she doesn’t want me to buy her anything. All she wants is a trip to London in the spring. She’s much more keen on making memories than buying anything new.”