A whopping £3.6MMillion National Lottery win for Helen and Lee

A mum from Cumbria has enjoyed a birthday to remember after scooping an incredible £3.6MMillion National Lottery EuroMillions win on her 58th birthday. 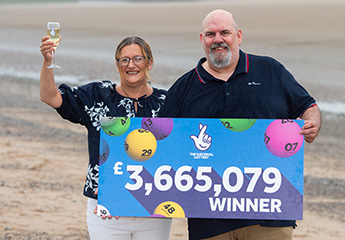 Helen Kuchczynski, a financial administrator, who matched five main numbers plus one Lucky Star on the EuroMillions, joked that her birthday this year was a little more exciting than ‘the Chinese takeaway’ she usually treats herself to.

And while Helen’s husband, Lee, 58, a HGV driver, is enjoying a new dream car (an Audi RS4 Avant), Helen says their first couple of purchases were much more low-key.

Helen said, “My first purchase as a millionaire was two bags of cat litter while Lee invested in a new back-scratcher, not sure that can be considered living the high life!”

The couple’s winning journey started when Helen bought a EuroMillions Lucky Dip ticket online at national-lottery.co.uk. The next morning, Helen spotted an email from The National Lottery alerting her to a win.

Helen could not believe it when she saw the message showing her win as £3,665,079.10, so asked her daughter to take a look. Helen said, “She looked at it, refreshed the app, refreshed it again, and, finally, turned to me and calmly said, ‘Mum, I really think it’s real; you need to ring the number.’

“The only problem was the phone lines weren’t open at that time in the morning so we spent the next 20 minutes drinking endless cups of coffee and giggling at one another, and thinking what was Lee going to say!” 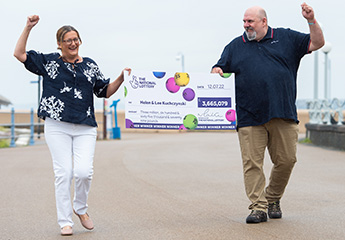 As soon as the win was confirmed, Helen rang Lee to share the good news. Lee said, “As a HGV driver I leave home on a Monday at 3:30am and get back Friday night, so we’ve shared many of life’s ups and downs via phone. But that’s one call I will always remember. Helen told me she had good news but that I had to pull over as it might be shocking. Hearing, ‘we’ve won £3.6MMillion on The National Lottery’ certainly was good news and certainly was shocking!”

The couple, who have been married for 24 years, are going to take some time to get used to their life-changing win. Helen said, “Lots of people have asked us if we’re jetting off to exotic locations now but to be honest, we live in a beautiful part of the world and we’ve rushed about, so for now, we’ll stay put and enjoy the peace.”