Pratap’s big win is a walk in the (car) park

Pratap Patel was standing in a supermarket car park when he discovered he had won an amazing £102,904 EuroMillions prize.

The 71-year-old from Wembley, who works part-time at a fast food chain, was astonished to learn he had matched 5 main numbers in the EuroMillions draw on 27th August 2021.

Pratap’s winning journey started when he bought a few Lucky Dip lines for the EuroMillions draw while doing the weekly shop. Popping the ticket in his wallet he thought no more about it until he went to the supermarket 2 days later to pick up some cat food and took his tickets with him to be checked.

He said, “The person on the counter put my ticket through the machine and handed me a slip of pink paper, explaining I’d had a win but that it was too much to pay out from the till and I needed to call The National Lottery. I took the slip and called the number from the supermarket car park, and when the lady confirmed the win and told me how much, I nearly fell over. It’s just incredible; you don’t expect to hear you are £102,904 richer while standing in a supermarket car park!” 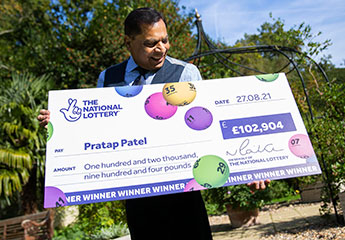 Pratap, who came to the UK in 1976 to study at university, signed the back of his ticket, put it safely in his pocket and went to work where his colleagues were delighted to hear of his win. Even more delighted was Pratap’s son who initially thought his father had won £102, until Pratap repeated the amazing number.

With Pratap’s winnings safely banked, he’s in no rush to make any big plans although he is looking forward to planning a trip to visit family in Mumbai, and meeting up with his daughter, who is based in Qatar, for a European break.

He said, “I haven’t made any firm plans for the future, but I’m going to enjoy every second of the day-dreaming and planning!”

Pratap bought his winning EuroMillions ticket at Asda in Wembley Park. His winning numbers were 02, 03, 31, 46 and 50.