A syndicate of bus drivers from Carlisle has won a ‘double-decker-sized’ prize in the EuroMillions draw held on 16th April 2021. 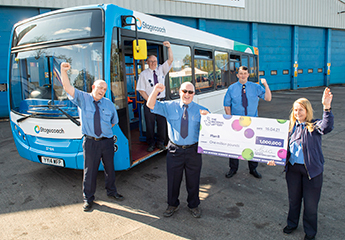 The 10-strong syndicate, who call themselves Plan B, will bank an amazing £100,000 each after their ticket scooped a £1MMillion UK Millionaire Maker win.

One of the syndicate’s members, 50-year-old Kevin, said he realised something was up when he noticed he had 3 missed calls from Plan B’s leader, David.

Kevin explained, “We have a group chat and my phone just started to ping. I called David back and he just said, ‘Kevin I need you to check our ticket. I think we may have won and won big!”

When David sent Kevin a photograph of the ticket he quickly realised it was a winner. Kevin said, “When I realised we had won I couldn’t quite believe it. You always hear of people winning The National Lottery but you just think it will never happen to you!” 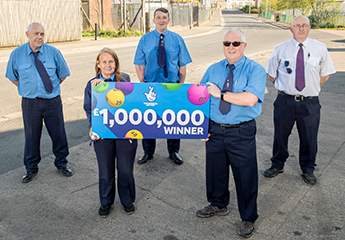 Every member of the syndicate, which was formed 8 years ago, is based at the Stagecoach Carlisle bus depot. The members range in age from 30 to 65 and they are all bus drivers with the exception of Susan Kilgour who is company secretary.

Kevin, who has been a bus driver for 16 years, said each member has different ideas about how to spend their prize money. Kevin has 3 children and 4 grandchildren, so “treating the family” is his top priority.