Joe and Jess Thwaite have become the country’s biggest-ever National Lottery winners after scooping the £184,262,899.10 jackpot in the EuroMillions draw held on 10th May 2022. 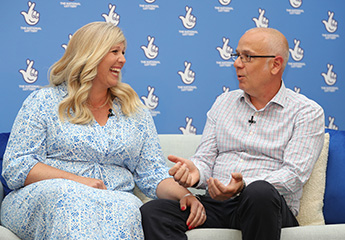 The Gloucester couple, who described the amazing win as “surreal”, said they decided to go public with their good fortune because they wanted to share the windfall with family and friends.

Jess, 44, said, “I don’t want to lie to family and friends, I want to enjoy it with them. Maybe, naively, I thought we could tell a few people and it would be fine. But the list gets longer and soon you realise it would be a burden asking them to keep it quiet. Telling people makes it easier.”

While the size of the win is taking time to sink in, Jess revealed she was more prepared than many, thanks to her late father. She said, “My dad played The National Lottery all his life and constantly dreamed of winning. He would always ask us what we’d do when we won, how we’d spend it, who we’d treat. It was a regular conversation and I feel like he was preparing us. Maybe that is why I seem so chilled, as I’ve kind of been ready to win for years.”

Joe, a 49-year-old communications sales engineer, bought the winning ticket at 4pm on the day of the draw. After feeding his dogs at 5:15am the following morning, he checked his phone and saw an email from The National Lottery saying he’d won a prize.

Joe said, “I looked it up and saw we’d won. I saw how much and I didn’t know what to do. I couldn’t go back to sleep, I didn’t want to wake Jess up so I just laid there for what seemed like forever.”

When Jess awoke, she struggled to believe what Joe was telling her. Believing the massive win might be a joke or a simple mistake she got up to make a coffee and start her day as normal.

Jess, who manages the business side of a hairdressing salon she runs with her sister, arranged to meet her mother in a car park before work. When she said Joe had won The National Lottery her mum started screaming. Jess recalled, “She knew exactly how much right down to the ten pence. She had meant to ring Joe the night before to check he had a ticket and had forgotten. I told her it might not still be real but she was having none of it! She said, ‘If The National Lottery have told you, then it’s real!’”

Jess and Joe have 2 primary school-age children and Joe has 2 children at university from his previous marriage. Jess said, “We’ve had a week to think about this and we now hope to share lots of experiences and go on adventures with our family and friends.”

The couple have recently moved into a new home to give their children a taste of the countryside. They share the property with 3 dogs, 5 chickens, 2 geckos and 3 ponies, two of which are on loan.

Jess said, “I always wanted the children to be able to get up in their pyjamas, put wellies on and go out and feed the ponies and they can do that here. The fact the roof leaks and the house needs renovating was OK as it was the life we dreamed of for our family.”

While treats for family and friends are top of the agenda, the generous couple have a few ideas for themselves. Joe said, “I’d love to watch Gloucester or England rugby live with the kids and I’d love us all to get on a plane and go on a holiday somewhere sunny.”

Jess said, “Our 2 children have always talked about going to Hawaii. I’ve no idea why, but we can now make that dream come true. Just to see their faces when we can make these things come true will be worth every penny.”