Gareth Bradley took Ruby, his 16-week old puppy, outside to spend a penny and came back to find he was £500,000 richer. 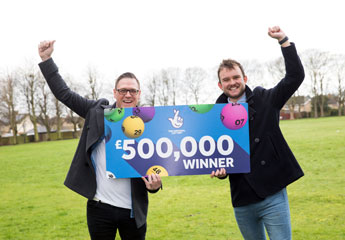 The 41-year-old supermarket store manager from Milton Keynes had just played an online Instant Win Game from The National Lottery when the playful springer spaniel “made it very clear she needed to spend a penny”.

Gareth said, “I’d pressed the final letter to be revealed in the game, but in a situation like that you don’t mess about, so I immediately took her outside.

“Ruby’s penny spent, we came back into the house and as I picked up my phone saw it was flashing £500,000. I just couldn’t work out what had happened, so I logged into my National Lottery account where I saw a balance of £500,000. Turns out, the last letter I pressed was the top prize-winning M!”

Overcome with excitement Gareth rang his partner of 8 years, Connor Dennis, to share the news. Connor, 28, said, “Gareth sounded really shaky as he fought back the tears, saying to me ‘you won’t believe what’s happened’. Given the times we are living through I assumed the worst and that something dreadful had happened. I ran out of the open plan office thinking I needed to find somewhere private to commiserate with him, only to discover I needed somewhere private to let out some whoops of delight, but only after he’d sent me a video of the winning message to prove he wasn’t winding me up!”

Gareth’s family also took a bit of convincing when he called them with the good news. He said, “All my siblings thought it was a joke but now they know it’s real, they are over the moon for us – news of this win has given so many people a boost. We are a really close-knit family who love a laugh and a joke, but we’ve had our tough times too. We lost my mum and dad 5 years ago, so of course we are sad they are not here to be part of this moment.”

The £500,000 National Lottery win is the culmination of a busy period for the couple who have both been working throughout the pandemic. Not only that, in September, Gareth, who has twice been the proud ‘donor dad’ for very close friends, celebrated the birth of his second son. He has also started a new job, bought his first home with Connor and welcomed Ruby into their lives.

Gareth said, “It’s been a crazy time all round, but I think winning £500,000 while your puppy spends a penny has to be the craziest of them all!”

The couple intend to put part of their prize into their mortgage. And while they have a few “frivolous plans” – a Rolex for Connor and a Range Rover to replace Gareth’s Kia – they are determined to make the most of their windfall. Connor said, “We have lots of plans to really make the money work hard so that it’s there for our families in the longer term.”