Simon Wilcock has experienced tragedy and triumph in a single week. Just days after the signwriter from Helston, Cornwall lost his beloved mother to cancer, he won £100,000 on a National Lottery Instant Win Game. 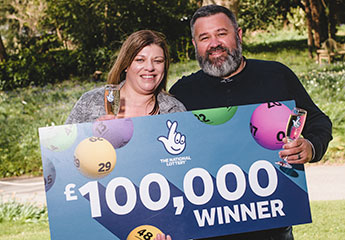 Now 44-year-old Simon is sure his late mother Alison played a part in his win.

He said, “I have an order in which I play the games in, as they show up on my phone screen. I don’t usually play £100,000 Jackpot Yellow, but for some reason I did this time, and I’m so glad that I went for it. Maybe it was a sign from above, as I certainly feel that Mum was looking down on me and I know she would be over the moon.”

The first people Simon told about his windfall were health visitor wife Becky, 41, and their two sons. After that he phoned his father to break the news, but admits his reputation as “a bit of a kidder” made it hard to convince his Dad and his mates he had come into some money. 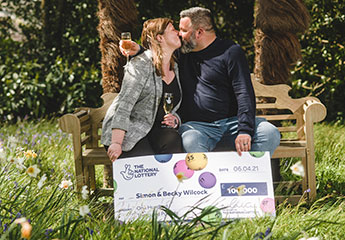 Simon said, “It’s been such a strange year for us all. Becky and I worked flat-out throughout the lockdown. I had a few weeks where I couldn’t open the shop and was taking care of the home schooling, but as soon as I could reopen, there was plenty of need for our services, which I’m very grateful for.

“Losing Mum after her valiant 18-month fight against cancer is obviously the biggest, most horrendous downside of the year, for all of us as a family. She is a huge loss and this has given us just a glimmer of happiness.”