Karen Dakin from Ipswich has enjoyed an amazing Mother’s Day after becoming a Lotto millionaire.

The 53-year-old mum discovered her numbers had come up late on Saturday 13th March – the day before Mother’s Day. 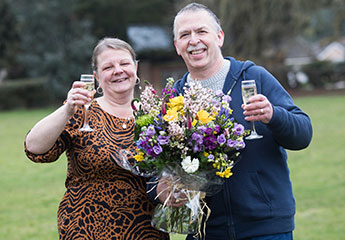 She said, “It was a usual Saturday evening, relaxing in front of the TV with a drink or two. But as I watched the draw results live on TV I immediately knew they were my numbers!”

Appropriately, for a win on the eve of Mother’s Day, Karen’s lucky numbers had a strong connection to her close-knit family. She said, “I’ve always picked numbers special to me, including my son Callum’s date of birth – the year and the time – so I instantly recognised the winning numbers. What an amazing turn of events – my son has, in some strange way, helped give me the most amazing Mother’s Day gift of all time!”

Karen confirmed her win by phone at 9am on Mother’s Day. She said, “When I called the National Lottery line, I remember the man on the other end of the phone saying, ‘you’re rather calm!’, after he’d just confirmed the life-changing news. I guess I was just in a state of absolute shock!”

Being able to share the good news with close relatives was a fantastic experience for Karen, particularly since her family has had some tough times in recent years.

Karen explained, “My husband, Jeff, had a serious stroke in November 2018. Thankfully he has been able to make a good recovery, and that has a lot to do with the fact that he was at work at the time – he has been an NHS storeman at Ipswich Hospital since 2001 – so was in surgery within a matter of minutes of the stroke happening.

“Jeff was in hospital for a month and, of course, I was there by his side every day whilst also working hard and trying to keep strong for Callum. All of my family were amazing, as was the school where I work during the toughest of years, and I am looking forward to celebrating with all of them as soon as it is safe to do so.”

Jeff, 60, has now returned to work, determined to be part of the amazing national effort during the pandemic.

The couple, who have been married for 35 years, hope to take a dream holiday when it is safe to do so. Karen said, “After the time we’ve all been through we’d love to get away – maybe Centre Parcs before a big trip to Walt Disney World in Florida.”

Paying tribute to his wife, Jeff said, “No-one is more deserving of this win than my amazing wife, Karen.”