£1MMillion Lotto win adds up to an exciting night

Malcolm Haines is no stranger to big numbers, but the 49-year-old accountant admits he was flabbergasted when he realised he’d won £1MMillion in 9th January 2021's Lotto draw. 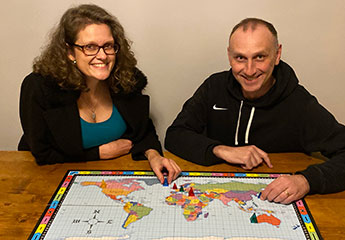 He said, “I’m used to seeing lots of noughts, but when they are your noughts it’s a completely different matter!”

Malcolm picked up a few Lucky Dips for the Lotto draw during a trip to a supermarket in Reading. He put them in his phone case and didn’t think about them again until much later that day.

Just after midnight, when Malcolm’s wife Rebecca and their 2 teenage children had gone to bed, he decided to check the tickets. He said, “I always check using the app and, much to my wife’s amusement, shut my eyes when it’s scanning in the hope that I hear that little bell. This time I heard the bell, opened my eyes expecting to see a Lucky Dip, perhaps a fiver, and instead saw lots of noughts!”

Rebecca said, “I was in bed when Malcolm shouted up to me, I’ll admit I wasn’t keen to leave it but when he showed me the message on the app, sleep was very quickly forgotten. 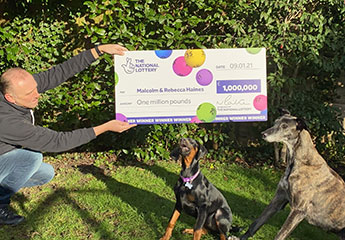 “We looked at each other and started to laugh, then, because we wanted to share this amazing moment with the children, we called them down too and all stayed up discussing some crazy, and not so crazy plans, for our winnings.”

Travel, when it’s safe to do so, was high on a wish list that includes Australia, Canada and a host of European destinations.

All that remained was to make sure the winning ticket was safe from Mabel, the family’s Doberman puppy. Malcolm said, “All I could think was ‘what if she somehow gets hold of the ticket and chews it’, so having left it on the bedside table I got up again, took lots of photos as evidence and then put it higher on a shelf, out of Mabel’s reach!”

Malcolm and Rebecca, who both work for accountancy firms, are keen to treat themselves to a John Cooper Works MINI convertible.