A syndicate of 20 friends from Hertfordshire calling themselves ‘The Lottery Ladies’ have ended a difficult year in style with a £1MMillion Lotto win.

The syndicate – which formed more than 20 years ago and whose members are aged between 40 and 75 – has enjoyed a few Lotto wins over the years, but nothing that compares to the £1MMillion they scooped in the 19th December draw.

The syndicate’s leader, Shelley Samuels, discovered the group could each look forward to a £50,000 share of the prize when she phoned Camelot the day after the draw. She sent a text to the other members that said, “Please make sure you are sitting down; we’ve won £1MMillion!” 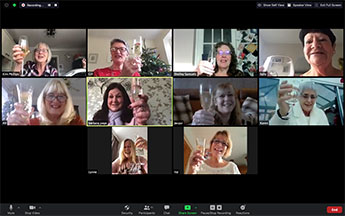 The timing of the good news – on the same day Hertfordshire went into Tier 4 – provided some sunshine at the end of a tough year.

Shelley said, “Some of the members told me they had literally just got off the phone to family members cancelling Christmas when they received that text. While no amount of money can change the heartache of missing out on being with our loved ones at Christmas, I think one of ‘The Lottery Ladies’ summed it up the best when she said that the win was just the lift we needed going into 2021.”

Prior to their 19th December win, ‘The Lottery Ladies’ had scored a total of £26 each from playing every Saturday Lotto draw during 2020. Shelley suspected a bigger win was in the offing when she received a message on The National Lottery app asking her to call.

She said, “Usually, the message congratulates us on the win but this time when I logged on it asked me to call Camelot. I Googled the telephone number to check it really was Camelot and, while I was pottering around in the kitchen tidying up after lunch, I decided to call – not for one second imagining the call would lead to someone confirming we’d won £1MMillion!

“My poor husband, who was on the phone to a relative at the time, had no idea what was up until the lady at Camelot confirmed the win and I started to scream!”

The screaming may have abated a little, but there are still plenty of smiles as the syndicate’s members work out how to spend their winnings. Topping the list for many are plans to help out family members after a very difficult year. Home improvements are also high on the agenda and one of ‘The Lottery Ladies’ is treating herself to a new dining table, not because she needs one, but because she wants to treat herself.

Some of ‘The Lottery Ladies’ who will be sharing the prize with Shelley are Val Booth, Gill Gilbert, Sally Phin, Jacqui Montgomery, Lynne Bennett, Kim Phillips, Karen Warby, Ali Maughan and Barbara Page.