One minute Bexhill dad Paul McDonald was putting up the Christmas lights at his family home, the next he was dazzled to learn he’d won a whopping £1,063,516 Lotto prize. 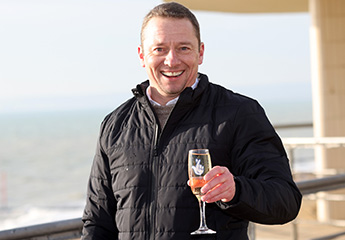 Paul, 48, wants his amazing win to be enjoyed by his family and friends. He said, “it means we can enjoy little sparkles every now and then. Whether it’s a ski holiday, meals out with family and friends or weekends away, it’s a chance to make wonderful memories.”

Describing the moment he learned he’d become a Lotto millionaire, Paul said, “It’s crazy – one minute you’re battling with extension leads and focused on putting up the Christmas lights, hoping to make it to the second half of the local Christmas panto to see your youngest’s performance, the next you’re a millionaire!”

Paul, who works in distribution, said the “analytical side” of his brain is still coming to terms with his good fortune. But he added, “The other part of my brain, the dreamer and adventurous side, is all over the win!”

Paul’s millionaire adventure started when he got a National Lottery email congratulating him on a win. He assumed it was a Lucky Dip or £30, so was flabbergasted when he logged into his account and saw the prize was £1,063,516.

He said, “I’d like to pretend I leapt about celebrating, but instead I logged out, shut down the computer, made myself a cup of tea and watched the football for 5 minutes. I think it was my way of dealing with the surprise, but a slurp of tea and a bit of football kickstarted me. I logged back into the account about 30 times, each time expecting [the prize] to disappear, but always seeing the same winning amount. Eventually I took a screen grab and dashed off to catch the second half of the panto.”

Arriving late, Paul had to quietly take his seat alongside his partner, where he showed her the screengrab. In the gloomy light she misread the prize as £1,063 and whispered, “great, we can get the bathroom done”.

When the family returned home that night, they could finally sit down to discuss the win. Paul said, “I work in distribution so it’s been a whirlwind of a year involving lots of travel and project management, and with Christmas a very busy time in my industry, there’s barely been a spare second to plan for Christmas let alone plan for becoming a National Lottery millionaire!”

Paul celebrated his win at the National Lottery funded De La Warr Pavilion on the Bexhill On Sea seafront. Most recently the Pavilion received a grant which will support its recovery after 4 months of closure due to Covid-19.