A champion ballroom dancer from Leicestershire has waltzed off with a strictly sensational prize – a £1MMillion National Lottery win on a Lotto ticket.

True to form, Theresa Picton-Clark – or Terri as she is known to family and friends – celebrated her win by waltzing around the living room with her husband John. Terri, 69, who works as a Facilitator at Project Pony, a National Lottery-funded equine therapy project, says she intends to celebrate her win by buying a new dress and shoes to wear when it is safe to return to the dancefloor. John, 69, who is retired, has his eye on a bespoke suit from London’s Savile Row.

Recalling the moment the couple realised they had won £1MMillion, Terri said, “The neighbours could see us jumping up and down, dancing and celebrating and asked us what we were doing. We told them about our win and they ended up celebrating with us, socially-distanced from our respective front gardens.”

Several bottles of champagne were uncorked during the celebrations. Terri said, “John didn't get up until 3pm the next day!”

The couple were on their way to a hardware shop in search of a new kitchen when they bought a ticket for the Lotto draw on 9th January. Terri said, “On our way to our kitchen appointment, we stopped off to get some petrol and John bought a Lottery ticket – he always buys a Lucky Dip. He said to me, 'you never know, we might win the Lottery', to which I replied ‘Oh, you always say that!’.”

John didn’t check the ticket until Monday when he popped back to the garage shop where he had bought it. Terri said, ‘The cashier said, 'you are going to have to call Camelot, you've won too much money.' I was working on a Zoom call when John came in waving the ticket about, and I mouthed to him 'what are you doing?' but continued the call, ignoring him. We were thinking it was around £50,000, but when Camelot confirmed it was £1MMillion, John was very calm (as usual) and I was the one jumping up and down!”

Terri added, “John gave the shop assistant at the garage who sold him the ticket £100 and said to her, 'make sure you don't do anything sensible with the money'.” 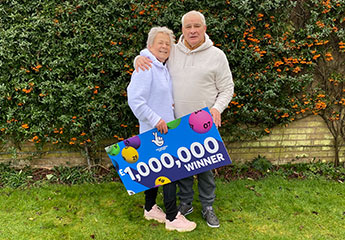 The couple have already helped friends and family with some of their new-found fortune. Terri said, “We’ve helped friends who are home-schooling their children – we bought another laptop for them to make things a little easier and we also bought one for my grandchild to help my son. To be able to tell friends who have always been there for you that you can help them feels amazing.”

Plans for the future – besides Terri’s new dress and John’s suit – include a trip to Antarctica, when it is safe to do so. There is also talk of a ski trip with the grandkids. Terri said, “I would love to go again, if I can still do it! John has never been on a winter holiday.”

Terri is an amateur Ballroom and Latin dancer and has competed in many competitions. She is the only ISTD (Imperial Society of Teachers of Dance) member who has won 5 ballroom and 2 Latin titles, retiring undefeated in ballroom.

Her Lotto windfall isn’t the only major stroke of luck she’s experienced in recent years. Terri first met John 22 years ago when they worked together, but they went their separate ways. She said, “3 years ago, when the ‘Beast from the East’ storm hit, I came home from a really dreadful date and wondered if that was all there was out there for me. I went back on the dating site for one last look and came across John who was stranded in the same area due to the blizzard.

“I thought to myself, 'I know him', so I messaged him and asked if he remembered me. He replied and said, 'Of course I remember you and you're looking even better than you did all those years ago!”

Terri continued, “We met up that weekend and the rest is history. He was always the one that got away.”