A couple from Somerset are feeling truly ‘egg-static’ after finding out they won £1MMillion on Lotto as they prepared an Easter egg hunt for their children. 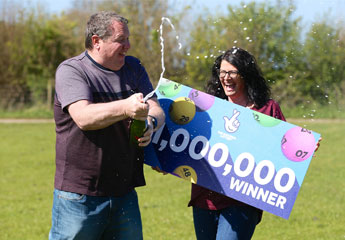 Stephen Webster, 44, was checking his emails as his partner Arran, 40, hid the last of the chocolate eggs for the Easter Sunday hunt. When Stephen realised he was a National Lottery millionaire, he momentarily forgot his 2 children were waiting patiently upstairs for the fun to begin.

He said, “I noticed an email from The National Lottery with news about my ticket. I didn’t really think much of it, but when I logged onto my National Lottery account and actually clocked the amount, I had to sit down. I called Arran over and she checked it a few times too. After that we were both in such a tizz that we forgot about the Easter egg hunt and the fact that the kids were still upstairs!”

The couple managed to switch their attention back to the Easter egg hunt and called their children downstairs to begin searching.

He said, “Once all of the eggs were found and the kids were preoccupied with chocolate, we sat down for a cup of tea and checked it all again, just to be sure it was real. We eventually confirmed the win with Camelot later that day but it has only really just started to sink in.”

Stephen, a Control and Instrumentation Engineer at a power station, and Arran, a Dispensing Optician, have big plans for their win. He said, “We want to take the kids to Disneyland. When we told them about the win it was the first thing they asked. They don’t really understand what is going on but are really excited at the prospect of getting to meet Mickey Mouse.”

Stephen has plans of his own: he hopes to restore a classic car sitting in his garage and get it back on the road. He said, “I have had it for about 20 years but the kids came along and it isn’t very child friendly.”

While Arran has more modest plans – she is looking at some new bifold doors for the dining room – Stephen has already treated himself to something special. He said, “The evening we found out about the win I was speaking to a friend who’s organising a trip to the Rugby World Cup in 2023, in France. So I have bought some tickets to a couple of the games.”

The couple also hope to make some family memories with visits to several festivals this summer and a trip to the iconic Glastonbury festival next year.