Ian’s hot property after winning £2MMillion on a Monopoly Scratchcard

Sticking to his routine has paid off handsomely for Ian Black, a tyre factory worker from Carlisle who has scooped the £2MMillion top prize on The National Lottery’s Monopoly Deluxe Scratchard. 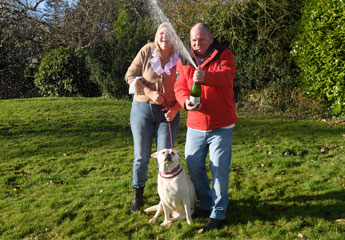 Ian, 61, is in the habit of buying a newspaper each day after working the night shift at Pirelli Tyres. On this particular day there were roadworks outside the shop and he almost decided to keep going.

Something convinced him to stop, however. Once inside the shop his eye was caught by the Monopoly Deluxe Scratchcard. Ian said, “Something was just telling me to buy it.

“I went out of the shop and sat and scratched it – I just could not believe what I was seeing. I let out a scream and immediately drove home. As I went into the house I was shouting to my wife, Sandra, to come down the stairs. She immediately thought something had happened to the dog. I said no, we have won £2MMillion!”

Sandra thought her husband was pulling her leg at first. But when she realised he was serious she almost fainted. Ian said, “Sandra just went white!”

The couple have 5 children and 10 grandchildren, so some treats for the family are definitely on the cards.

Not surprisingly, Ian is still coming to terms with his amazing win. He said, “I don’t think I have ever seen that many zeros. I kept questioning, is this really £2MMillion? You always dream about it, but it just doesn’t happen to people like Sandra and I. Well, now we are proof it does!”

Ian, a Carlisle United football fan and keen rugby fan, will be buying a new TV to enjoy all the matches. And he expects to attend a few games at Twickenham in the not too distant future.

He said, “To think I almost didn’t go into the shop that morning because of the roadworks. I really was so close to just driving past!”