Postie with the most: Martin ‘delivers’ £300KThousand Scratchcard

The lockdown may have prevented Sandra Devine from celebrating her husband’s birthday at an Italian restaurant, but her decision to send him to the local shop to buy some National Lottery Scratchcards instead has delivered the best birthday present ever.

Sandra, 36, and Martin, 54, are looking forward to a fantastic Christmas after winning £300,000 on a National Lottery Scratchcard on the 7th November. 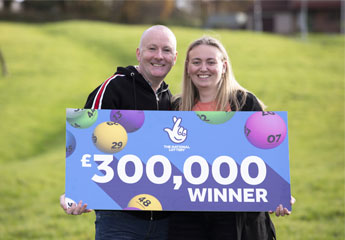 Sandra was sitting at the bottom of the stairs at home with one of the Scratchcards Martin had bought her when she realised she had won. At first she thought it was a £100 win, while Martin thought it was £1000. When they called Camelot and learned they’d won a whopping £300,000 they could hardly believe their luck.

Sandra said, “The agent at Camelot asked me if I was sitting down which I thought was odd for a £100 win. I just couldn’t believe it when they told me I had won the top prize. I just kept shouting ‘no!’. It really has come at the perfect time.”

The win is just as exciting for the couple’s children aged 9, 10 and 13. The youngest is already asking for a new iPhone 12.

Sandra hopes to buy the family a bigger house in the new year. She said, “It’ll be the first time our 13-year-old daughter will have had her own room, so she is already planning the décor.”

Meanwhile Martin has his eye on a new set of wheels. Sandra said, “As a postman, Martin has always driven a van so he wants to buy a new car. I was taking driving lessons before lockdown in March so I can’t wait to start these again. We’re not quite sure yet what make or model we’ll go for, but we’re excited to go car shopping.”