Michael McCaffrey recently set up his own car wrapping business, but after winning the top prize of £100,000 on a National Lottery Scratchcard, the 34-year-old from Lancashire is feeling pretty ‘wrap-turous’ himself.

Michael had always dreamed of being his own boss and left his job as a salesman last summer to start his car wrapping outfit, The Dapper Wrapper! He now intends to invest a large chunk of his win into his new business.

He said, “It was as if I was meant to buy that Scratchcard. The timing could not be more perfect as I start out in my new business.” 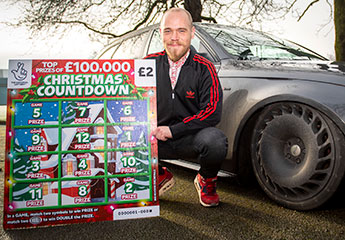 Michael bought his winning Christmas Countdown National Lottery Scratchcard on a whim as he was about to leave a shop in his home town of Accrington. Remembering he hadn’t cashed in a couple of winning Scratchcards he bought earlier in the month, he went back into the shop to claim his £35 prize.

He said, “As I approached the counter, the Christmas Countdown Scratchcard really caught my eye, for some reason. Christmas had come and gone and I thought I can’t leave that Scratchcard sitting there, so I bought 4. At £2 each, this was only £8!”

His modest outlay earned a handsome return. He pocketed 2 individual £5 wins on the first 2 Scratchcards, £10 on the third Scratchcard and the top prize of £100,000.

Michael struggled at first to believe he’d won the top prize. He said, “I just thought this can’t be right. This sort of thing doesn’t happen to normal people like me. I kept playing mind games with myself and tried to convince myself that this just couldn’t be true. I even FaceTimed my mum to show her the Scratchcard and said …. ‘Mum this isn’t a winner, is it?”

It was only after he called Camelot to confirm the win that he realised he was £100,000 better off. He said, “I was close to tears on the phone – and I have to confess that when I came off the phone I did burst into tears! This is just incredible and the win will make such a huge difference to my life and my new business!”