A £100,000 win on a National Lottery Scratchcard means a retired welder will be able to get his beloved motorbike in top shape for a return to the open road.

Alan Nairn, a former motorbike racer who turns 80 this year, has owned his Honda VF-1000R for 37 years. But the cost of insurance and coronavirus restrictions banning non-essential travel, have meant the Cardiff man has spent more time maintaining the bike than riding it in recent times. Now, after scooping £100,000 on the £100,000 Multiplier Scratchcard, he’s looking forward to a future on the open road once longer journeys are permitted. 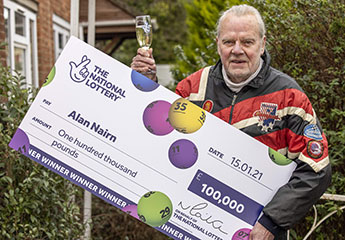 Alan said, “I had all but given up hope that I’d be able to ride my bike again. Now, after spending months only going to Tesco and the Post Office, I’m looking forward to safer, warmer days and taking my bike to the Brecon Beacons and my beloved Tenby.”

Alan’s much anticipated return to the highway almost ran into a dead end when he came close to putting his lucky ticket in the bin after misreading the numbers.

He said, “I was looking for small prizes when I scratched the card and when I didn’t see those, I started to throw it away. Then I realised that there was an awful lot of zeros and took another look. I couldn’t believe my eyes and kept the card for over a week before taking it to get it checked. I kept forgetting where I put it and was constantly rifling through old books to check it was safe.”

As well as getting his beloved Honda in top shape, Alan hopes to buy a new model locomotive and would like to donate some of his winnings to charity. He said, “I have lots of exciting plans for the money and I hope that I will be able to make some donations to causes I feel passionate about. I’d like to support the NHS somehow, put some money towards animal welfare charities and make a donation to a veterans charity which helped my parents after the war.”