Fisherman wins ‘Potts’ of cash by hooking a lucky Scratchard

Graham Potts, a keen fisherman from Sandbach in Cheshire, has hooked a big one: a £300,000 prize on The National Lottery’s Jewel Smash Scratchcard. 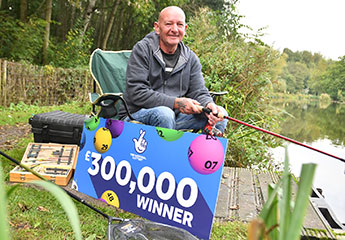 The 56-year-old traffic management engineer bought the lucky Scratchcard with some spare change after popping into his local One Stop. It wasn’t until he got home that he scratched off his amazing prize.

Graham said, “It still all feels a little surreal! I saw the number 3 and just thought I had won £3. I then started to see zeros but thought I was just seeing double or had maybe won £300!”

It wasn’t until he rang The National Lottery and had his £300,000 prize confirmed that Graham realised he’d reeled in a prize catch. He said, “I just fell silent. I didn’t know whether to laugh, cry, shout or what to do!” 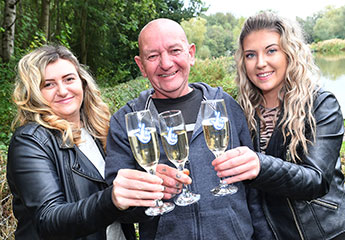 Graham celebrated with a glass of beer before going to bed, conscious he needed to get up for work early the following morning.

He thinks he’ll buy himself some new fishing gear and plans to treat his children: Megan, 22, Tiffany, 24 and son Joe, 27.

In the meantime, he’s savouring his good fortune. He said, “Never did I believe when I walked into the shop on my way home from work that I would become £300,000 richer. You always hope you will win – and I would have been happy with £300.

“You just think the big wins always happen to other people, but not this time – this has happened to ordinary me and could literally happen to anyone! It really is just totally amazing!”