A bartender from Leicestershire will be getting the next round in – after scoring the £100KThousand top prize on The National Lottery’s Win All Scratchcard. 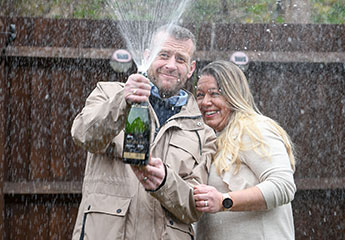 Jonathan Wright – known as Jonny – said his “legs went to jelly” after realising his win and he “ran home like a schoolboy” to celebrate with his wife, Heather, a student nurse due to finish her studies and join front line nursing in September.

The 40-year-old had gone to the local shop for some fresh air and a can of something fizzy when he bought his Scratchcard. He said, “I had £3 in change so just bought a National Lottery Scratchcard to use it all up. I’m not a regular National Lottery player but I just had the urge that day. I couldn’t even tell you why I chose the 1 I did. I started walking home and scratched it. Even though it’s just a 15 minute walk home from the shop, I couldn’t wait to tell Heather so I phoned her and she obviously didn’t believe my story. My knees aren’t good, having played a lot of football when I was younger, but that didn’t bother me – I just ran home like a schoolboy!”

When Jonny got home he showed Heather, 40, the Scratchcard before going over to his parents, who are part of his support bubble, to get a second opinion. He said, “I was physically shaking. Mum and Dad checked it for me, and again, and said it had to be a winner, so I just called The National Lottery there and then.” 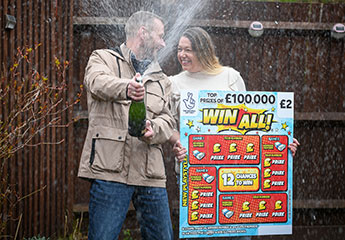 Finally convinced of the win, a couple of bottles of Prosecco were purchased and Jonny and Heather “sang and danced around the house” to celebrate the news.

Like many families across the UK, Jonny and Heather have had a tough 12 months. As part of the NHS, Heather has found juggling work and studying an emotional and physical challenge and Jonny highlighted the difficulties of home-schooling their 2 children.

Jonny and Heather’s children haven’t been abroad, so a holiday is a long-term goal, but in the meantime the pair will be treated to a ‘staycation’ when restrictions allow. He said, “This year is going to be a better year, it’s already started well and the next thing to look forward to is Heather graduating in September and becoming a nurse – a career she has always dreamt of.”