A Porsche and prosecco for lucky Set For Life winner

Laura Hoyle’s Cocker Spaniels Teddy and Barney have been travelling in fine style since the 39-year-old from Hucknall near Nottingham won the top prize on The National Lottery’s Set For Life game.

Laura and her husband Kirk, 37, decided to celebrate the amazing prize – £10,000 a month for the next 30 years – by getting a new car. Which means Teddy and Barney are heading off for walks in a shiny Porsche Cayenne!

Laura said, “It is amazing to drive and even the dogs seem rather pleased with their new surroundings!”

A new set of wheels isn’t the only treat Teddy and Barney will enjoy since Laura matched all 5 main numbers plus the Life Ball in the 1st March Set For Life draw. The pampered pooches will be treated to a luxury grooming session in the near future.

Laura didn’t realise she had won the amazing prize until 13 days after the draw. She explained, “I did get an alert just after the draw saying there was ‘good news about my ticket’ but I assumed I had won £5. I had received the same message before so didn't think too much of it.”

Laura – who has been playing Set For Life since the game was launched in 2019 – even took part in several more Set For Life draws before she received an email from Camelot asking her to log into her account and check her messages. She said, “I finally checked the App and saw there were lots of notifications there. It was then that the penny finally dropped that we should call Camelot fast!”

The phone call was nerve wracking, Laura admitted. She said, “I was physically shaking as I told the lady, ‘I think I’ve won!’”

She continued, “It was so weird saying those words! I kept thinking this must be a joke; it can’t be happening to us! And the ridiculous part was that, as I waited for Camelot to call me back, I still had to join work meetings online. I could hardly speak, let alone make any sense!”

Nerves soon turned into celebrations, however, with Kirk popping a bottle of Prosecco. 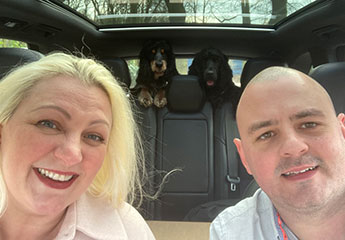 Convincing their mothers they had won proved quite a challenge. Kirk said, “Laura’s mum really wasn’t sure and decided to wait until we had it confirmed by Camelot before offering her congratulations.”

Kirk’s own mum was even more sceptical. He said, “She put the phone down on me 3 times! She kept saying, ‘You are having me on. I don’t believe you!”

Laura and Kirk hope the incredible win will allow them to enjoy their hobbies. Kirk, an aeronautical engineer at Rolls Royce, is a keen carpenter and hopes to set up a workshop to design and make bespoke furniture in his spare time.

Laura said, “We have always been busy people and we have lots of plans and ambitions. We are so excited about the future.”