Sheila Garrett, a great-grandmother from Gravesend, Kent, has banked £500,000 on Thunderball and declared, “I always knew I would win.” The 80-year-old seems to have a lucky touch, having previously won $20,000 playing a similar game when she lived in the USA.

Despite having told family and friends that she knew she was destined to win, Sheila Garrett does admit it is all a bit surreal. “I can’t get my head around it at the moment. It is still quite new and hasn’t really sunk in. It has become more real after holding the big cheque.”

Sheila is the mother-in-law of Kathy Garrett, a Winners’ Advisor at Camelot. Although Camelot employees are not allowed to buy tickets for, or play National Lottery games, extended family members who aren’t part of the same household – which applies to Sheila – are eligible to play. Kathy’s only role in Sheila’s win has been to provide support as any family member normally would.

Sheila always used to buy her Thunderball ticket on a visit to the shops, but this year has turned to playing online via the National Lottery website. Checking the winning numbers for this draw (on the 25th September), they all looked a little bit familiar. Sheila said, “I looked and thought they looked like my numbers and that I had better sign in to my National Lottery account. As soon as I saw the message that I had won, I knew it was £500,000 top prize. I always knew I would win Thunderball.”

Sheila immediately called her children to share the news. The great-grandmother of 15 certainly celebrated – her eldest son found her dancing around her flat when he visited later that day.

Sheila’s previous big win was back in the early 1990s when she lived in Florida. She won $20,000 on a similar style lottery game to Thunderball called ‘Fantasy Five’. What’s more, the US win actually played a role in her slightly bigger win on this side of the Atlantic. 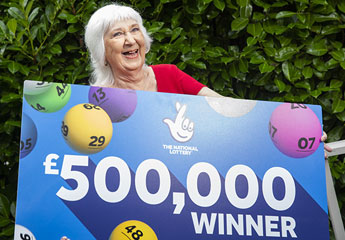 Sheila said, “Fantasy Five only allowed you to choose numbers up to 26, meaning my birth date – the 28th – had to become 2 and 8. The winning numbers in this Thunderball draw of course included 2 and 8. Also there were the birth dates of my three children 5, 14 and 24. The all-important Thunderball was number 10. Ten is supposed to be my lucky number – it certainly seems to be very lucky now.”

Sheila also feels that her luck isn’t over yet, with this second win just building up to her third – the big one. She said, “I’ve got my eye on the next win. I see the stories in the papers of the big winners my daughter-in-law looks after and it always takes me back to my win in Florida – and now it’s happened again! It’s been a bit more each time so it will have to be EuroMillions next.”

As for her spending plans Sheila has always said that she would buy a bungalow when she won, but now having had a look at property her plans have changed. She said, “I live in a flat in a lovely retirement community with a club and social trips. Buying a bungalow would mean leaving all that. There is a larger flat available in my complex so I have my eye on that. It is on the top floor so I suppose you could say I’m moving to the penthouse!”

The flat needs some work and Sheila is looking forward to the project. She said, “I have been saying to my son that I needed something to get stuck into, I am not one to sit around and be bored. Redeveloping the flat is perfect to keep me occupied.”

Sheila has always promised herself that when, not if, the win came along she would share her news. She said, “When I win my third one, I’ll definitely go public again.”

Winners’ Advisor, and daughter-in-law, Kathy said, “I’m delighted for Sheila. I have the most amazing job where I get to see lives changed by a National Lottery win and I know what a difference this will make to her. It’s great that she’s been able to share the news of her win and celebrate her good fortune.”