More than 400 isolated and elderly people in Scotland will tuck into luxury puddings this Christmas after a group of National Lottery winners packed the festive treats, attached a personalised greetings card and delivered the parcels to charities in Glasgow and Dundee.

The Christmas puddings, which were accompanied by a bespoke card designed by Edinburgh artist Amy Nash, were packed and delivered by a group of Scottish National Lottery winners. They were delivered to 2 National Lottery-funded charities: Glasgow’s Golden Generation and The Boomerang Club in Dundee.

Both organisations work hard to tackle loneliness among older adults by offering services such as virtual events and entertainment and providing meals to those who are isolated from friends and family.

The group of winners included Scotland’s newest National Lottery winner, Sandra Devine from Johnstone, who scooped £300,000 on a National Lottery Scratchcard in November 2020. Sandra, who delivered some of the festive goodies to Golden Generation, said, “Christmas is my favourite time of year, and while me and my family are looking forward to celebrating together, there are many elderly and vulnerable people around Glasgow who will be spending it on their own. I really hope our personalised cards put a smile on some faces and, most importantly, let them know that we are thinking of them over the festive period.” 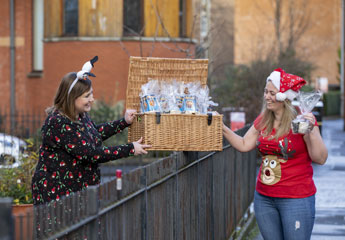 The Boomerang Club supports veterans as well as older people, a fact that was important to Ray who served in the army from 1970 to 1976.

Reflecting on his visit to The Boomerang Club, Ray said, “It was a privilege to be able to visit them. We had so much fun writing Christmas cards and packing puddings. Everyone could use a bit of festive cheer right now!”

Richard Donald, Chief Executive at Glasgow’s Golden Generation, said, “We’re extremely grateful to The National Lottery winners for these beautiful cards and puddings. We know that our older people will truly appreciate the extra Christmas joy!”

And Neil Ellis, Centre Manager at the Boomerang Club, said, “Thanks to the puddings from The National Lottery winners, our users will be able to enjoy a festive treat with their Christmas dinners and the cards are sure to bring a smile or two!”