Paralympic canoe gold medallist Emma Wiggs knows the Tokyo Olympics will be unlike any previous Games. But the 40-year-old is adamant the event presents an incredible opportunity in these unprecedented times.

Emma said, “It will be a very different Games – we can’t get away from that. But I feel quite positive and excited about the fact it will be a moment to showcase some sporting performances that will bring some positivity and inspiration. I hope we can use it as an opportunity to celebrate our efforts to overcome the really significant challenges of the last year.” 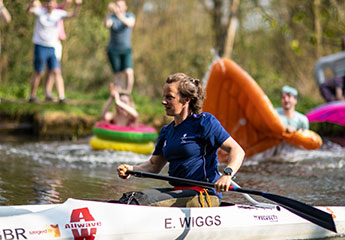 After winning a gold medal in Rio during paracanoeing’s first appearance at the Paralympics, Emma knows there is a lot at stake in Tokyo. As well as defending her KL2 title – a category for kayak competitors who have partial leg and trunk function alongside good arm strength – she will take to the water in a 2nd boat – an outrigger canoe propelled by a single paddle – to take on the world in the VL2 event.

She said, “It’s really exciting to have the VL2 in for Tokyo because it wasn’t for Rio. Splitting my time between 2 boats is an opportunity, but also a real challenge because they’re so different. It’s been a real battle over the past 5 years to keep both boats at a world class level.” 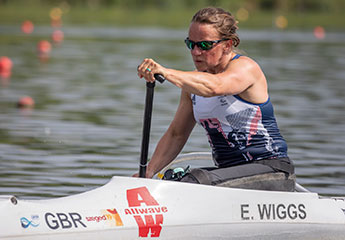 The fact that Emma, Charlotte and the rest of the 8-member squad are able to train together 6-days a week at a purpose-built facility in Nottingham, is partly down to the support provided to the nation’s top athletes by The National Lottery. Emma said, “[National Lottery funding] has had such a huge impact. It’s given us the opportunity to train full time in world class facilities with world class staff and that has reaped rewards in the form of medals.”

By playing The National Lottery you continue to help our athletes access the coaches and training facilities they need to be their best as well as allowing them to focus on their sport by covering travel and living expenses.

Emma added, “I always feel incredibly lucky that I get to paddle a canoe as my job and I’m always amazed that people find that inspiring. But we shouldn’t forget that or knock it. People go along and buy their National Lottery ticket because they want to be a part of this journey and their involvement and support has transformed my experience from a pretty average athlete to a world-beating one.”

Despite her extensive experience at the elite level – Emma was part of the sitting volleyball team that competed at the London 2012 Paralympics before switching to the canoe – she admits she still gets nervous before a big race.

She said, “It’s funny. You spend so much time dreaming of competing in places like Rio and Tokyo. Then, as soon as you’re there, all you do is tell yourself ‘I’m back in Nottingham, it’s just 200 metres and I know exactly what to do’. Yes, there will be nerves in Tokyo because it’s the world’s biggest stage. But I’ll just look down the lane and tell myself I’m back on that lake in Nottingham.”