Team GB did a fantastic job in Tokyo; now it’s the turn of our Paralympic athletes to make their mark.

English sprinter Jonnie Peacock, who lit up the 2012 and 2016 Paralympics with gold medal-winning performances in the T44 men’s 100 metres, is ready for action in Tokyo despite the postponement of the 2020 Summer Paralympics. 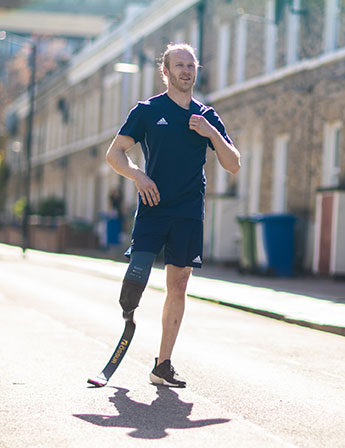 Jonnie, 28, said, “All you can do is control the things that are controllable. As an athlete it doesn’t really change the game plan. We treated every day as if the Games were going ahead.

“All I can do is make sure I prepare myself in the best way and hope I execute a good clean race and deliver a good performance.”

When the Tokyo Paralympics begin on Tuesday 24th August, Jonnie and the rest of the ParalympicsGB squad will be in top shape. Helping them every step of the way are National Lottery players who helped raise £337MMillion to fund elite sport between 2013-2017. National Lottery funding continues to help athletes like Jonnie get access to coaches and training facilities and cover travel and living expenses.

Jonnie said, “The National Lottery plays a big part in helping us win so many medals and be so prepared. The simple fact is this: [the funding] allows us to be full time professional athletes. And even before the London Paralympics in 2012, National Lottery support allowed British Paralympians to treat sport as their job – they got paid in exactly the same way as the able-bodied athletes. I definitely feel we lead the world in this respect.”

Tokyo will be Jonnie’s third Paralympic Games. He knows he faces some tough competition in the T44 event (a category for athletes with a single below knee amputation or who walk with moderately reduced function in 1 or both legs) as he seeks to defend his title.

He said, “There are multiple people who have run faster than me: Brazil’s Alan Oliveira, America’s Richard Browne and Germany’s Johannes Floors to name just 3. Johannes lit up the track last year and ran incredibly fast. He’s the guy that I’ll be making sure I’m in good shape for.”

Jonnie is convinced he can shave a few milliseconds off his personal best time – the 10.64-second run he achieved in the heats at the World Para Athletics Championships in London in 2017.

He said, “That was run in London and the fastest times don’t get run in this country. If you want to run faster you need to run hot in places like Doha and Dubai where it’s 40 degrees. If I can prepare myself in a similar way I can get back to 10.64 seconds in Tokyo if not even faster.”

One thing is sure: he knows he will feel the weight of expectation in Tokyo. He said, “Anyone who says they’re not nervous is lying. But nerves are good once you’ve understood how to control them and use them to your advantage.”

His advice to young athletes looking to emulate his sporting glory is simple. He said, “Don’t sweat the small stuff and celebrate success. Experience tells you that there will be ups and downs, so take the time to enjoy the ups, because those memories will help you get through the downs.”