The Tokyo Summer Olympics will be different to any previous Games, but Dame Katherine Grainger is convinced the event will be a celebration of international sport and a much needed “beacon of hope”.

The gold medal-winning Olympic rower and Chair of UK Sport, said, “These Games will be extraordinary, a celebration of sport and a gathering of the best Olympic and Paralympic athletes in the world unlike any other. We know the shadow of the virus still hangs over us, and our primary focus will be to ensure that every athlete gets safely to their start line with the opportunity to compete for their country. And when they do, with the opportunity to create more amazing and unforgettable sporting moments, they will be a beacon of hope to lift and reconnect us all after such a difficult year.”

Dame Katherine’s time representing her country as a rower – a period that saw her win 5 Olympic medals including gold in the women’s double sculls at the 2012 London Games – neatly overlaps with the transformation of British sport by funding from The National Lottery. In 1997, when she was part of the coxless pair that won the World Under-23 Championships, the idea that elite sportspeople might be given the financial freedom to focus exclusively on their discipline still seemed remote.

At the time, most athletes survived by undertaking paid work, taking out a bank loan, running up an overdraft or a combination of all 3. Dame Katherine said, “Athletes were genuinely talking about how to find petrol money. They’d be rowing first thing in the morning then eating breakfast while driving to work.” 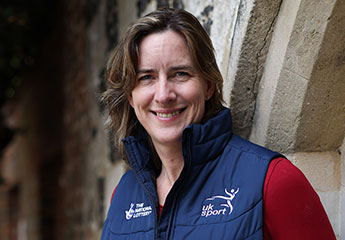 At the time of the 1996 Atlanta Games, when Team GB came 36th in the medals table and won a single gold medal, the nation was only spending about £5MMillion a year on Olympic sport. 4 years later, and thanks largely to funding made possible by National Lottery players, the amount had rocketed to £69MMillion.

Dame Katherine, 45, said, “I came into sport during an incredible period. It’s easy to feel National Lottery funding has always been there, but I was aware of what life was like before it.”

In the pre-National Lottery era the only truly professional sportspeople were those such as footballers and boxers who competed in events with a strong commercial backing. Dame Katherine said, “No‐one could leave university and plan to be an athlete or an Olympian or a Paralympian – that just wasn’t done, it was never heard of. Now I go to schools to speak to the students and they tell me they want to be Olympians or Paralympians and that’s an amazing change. Thanks to The National Lottery, that’s the transformation that has occurred.”

Dame Katherine and her teammates were fortunate: rowing was an early target of National Lottery funding thanks to its status as the only GB sport to have won a gold medal at every Olympic Games since 1984.

The start of National Lottery funding “changed things almost immediately”. Dame Katherine said, “All of a sudden there was an opportunity for coaches to be employed and there was less reliance on holding down a job while you competed. The level of training grew and became more professional and the ambition [of the athletes] grew with it.”

Funding has also enabled fantastic levels of scientific and medical support for athletes. That includes support for their mental health and wellbeing, something that is probably more important in Tokyo than at any previous Games.

The big question was this: would the new funding regime create a step change in British sport by the time of the Sydney Games in 2000? The answer: an emphatic yes. Team GB went from 36th in the medal table to 10th across all sports.

It was only the start. At the London Olympic Games in 2012, a team of 541 athletes won 65 medals, 29 of them gold. Four years later, in Rio de Janeiro, Team GB increased its total medal haul to 67, of which 27 of the medals were gold.

Success has become the new normal. Dame Katherine said, “It can be easy to feel we’ve had [success] for a long time and that National Lottery funding has always been there. There are new athletes coming in who feel – in a great way – it’s all they’ve ever known and as a result their expectations can be huge. In the past we had great athletes who didn’t have those great opportunities. Now we’ve got everything combined and you can see the success that flows from that.”

How will our athletes fare at the Tokyo Olympics and Paralympics? Dame Katherine said, “Every one of the 600 men and women who will wear the colours of Team GB and ParalympicsGB in Japan has had to display incredible levels of dedication to maintain their dreams of representing their country on the world stage. Despite all the disruption and anxiety, we have a team showing extraordinary potential. I am always incredibly proud of the athletes who represent the UK at the Olympics and the Paralympics."

She added, “Tokyo will be an extraordinary Games where our British athletes will touch the hearts of our nation with their courage and endeavour and will make themselves, their families, their communities and the British public proud. Every day in Tokyo we will witness moments of stunning skill, heart-warming bravery, inspiring entertainment and see sporting history being made.”