Shuttlecocks and blocks as new Paralympic sports take a bow

The inclusion of taekwondo and badminton at the Tokyo 2020 Paralympic Games is “game-changing” for the sports and will inspire more people to give them a go, GB Taekwondo CEO, Matt Archibald has said.

To showcase the newest Paralympic sports in action, The National Lottery has held an inclusive event at Liverpool’s Whiston Taekwondo Club.

Speaking at the event, Matt said, “For me, it’s [the inclusion of the 2 sports] game changing. We saw in 2000, when taekwondo came into the Olympic programme, that it gave the sport a massive boost and we’re seeing the same thing with para taekwondo now.

“Since the announcement we’ve been able to put on a full programme, which is National Lottery-funded, and we’ve got 4 athletes in the national training centre in Manchester training full-time.” 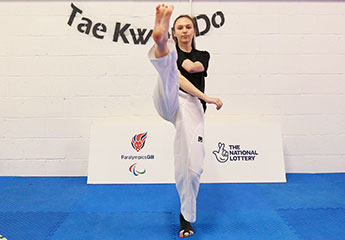 The event in Liverpool was part of a series of roadshows hosted by The National Lottery called Inspiring Communities. They are designed to help the nation engage in Olympic and Paralympic sport at grassroots level.

Isaak Dalglish, a young para badminton star, was at the event in Liverpool to talk about the sport and the effort to get more people on the court.

He said the fact para badminton matches in Tokyo were being screened by Channel 4 was hugely significant. He added, “It’s [mainstream TV] a platform where players can show themselves and prove themselves and show what this sport consists of. It’s massive for us and our ability to grow the sport.”

Another guest in Liverpool was Bradley Sinden, who won silver in the 68kg men’s taekwondo competition in Tokyo. He agreed the inclusion of taekwondo in the Paralympics was hugely significant. He said, “Now it’s been put in the Paralympics, that’s where it is becoming more mainstream. That’s where you can get a lot more people getting involved and events like this today highlight the sport’s development.

“Getting in the Olympics pushed it a lot and now getting in the Paralympics will push it and take the sport to the next level.”

National Lottery players’ support of ParalympicsGB athletes and new para sports is vital. If you’ve been inspired, visit www.parasport.org.uk to discover an inclusive community sport opportunity near you.