The sight of Sky Brown breaking down in tears after becoming Great Britain's youngest Olympic medal winner of all time, is likely to drive a boom in the sport, according to Skateboard GB CEO James Hope-Gill. 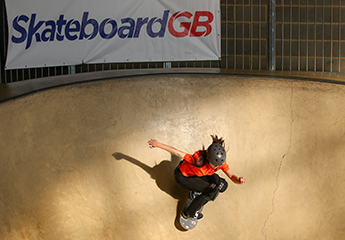 Brown, 13, claimed bronze at the Tokyo Games – the first to include skateboarding as an Olympic sport. As Brown and teammate Bombette Martin made history and broke barriers in a traditionally male dominated sport, they set the stage for the next generation of female skaters.

James said, “I think the inclusion of skateboarding as an Olympic sport is really important, because there’s always been this whole debate about if it should be in the Olympics or not. Its profile will increase now, and we’ll have an opportunity to increase participation."

He added that “fantastic investment” made possible by National Lottery players was helping expand grassroots facilities for skaters across the country.

National Lottery players are helping grow skateboarding in the UK by helping support various projects in the skateboarding community, as well as investing in the development of 10 skate parks across the country.

Inspired by Sky’s success, a group of youngsters from Hertfordshire came together at Hemel Hempstead Skate Park to try their hand at the sport.

Naomi Hicks, Director of Engagement and External Affairs at UK Sport, said the event – hosted in conjunction with The National Lottery – “is testament to how much these exciting new sports are growing and inspiring the next generation." 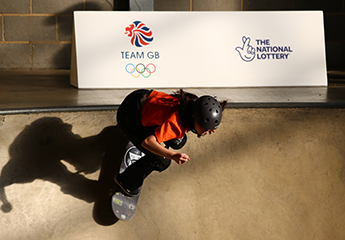 She added, “We’ve already got so many young girls here this morning, we’re talking to them about Sky Brown’s performance and how it’s inspired them to do the same.

"It’s absolutely fair to say that Britain’s success on the global stage of sport is absolutely thanks to the unwavering support of The National Lottery. Every time your mum, your dad, your friend goes and buys a ticket from the local shop they are absolutely playing their part in supporting Team GB to go on and achieve that success on the world stage.”

The National Lottery is proud to fund and support Skateboard GB. Through playing the National Lottery, you have helped transform the fortunes of Team GB over the past two decades as well as supporting community sport activities. Anyone wishing to get into Skateboarding can download the MySkate App or visit skateboardgb.org.