How female coaches gave Adam and Tom their edge

Team GB’s Adam Peaty and Tom Daley have more in common than the gold medals they won in Tokyo. The 26-year-old swimmer and the 27-year-old diver have both been coached all the way to the podium by inspiring women. 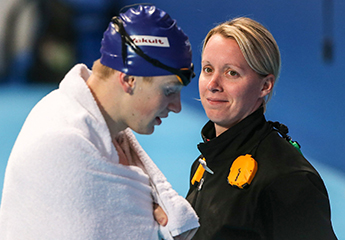 Adam – who became the first Brit to retain an Olympic swimming title after winning the 100m breaststroke in Japan – owes a great deal to Mel Marshall, his long-time coach. She has overseen his rise from talented teenager to the most dominant athlete in the sport.

Meanwhile Tom – who took his first Olympic gold medal in the men’s 10m synchronised platform alongside Matty Lee – is coached by the doyenne of diving, Jane Figueiredo (main image). Jane, who also coaches Matty, could be seen embracing the pair after they pipped the Chinese duo to gold by just 1.23 points.

Katherine Grainger, the chair of UK Sport, said, “We don’t often hear the stories of coaches and even less commonly we hear stories of female coaches. I think it’s just a really great message for anyone watching, who is either an athlete or interested in coaching, in the roles that people play and who they can be.”

Adam won Team GB’s first gold medal of the Games by finishing in a time of 57.37, the 5th fastest in history and a cut above the rest while still being 0.5 seconds off his own world record.

Afterwards, he spoke of the troubles he had overcome in partnership with Mel. He said, “The 99.99% we spend in the dark is for the 0.01% we spend in the light. That’s something that me and Mel have always believed in. That is why I do not think anyone deserves it more than me. It’s not an arrogant thing, I just love what I do and I know how powerful sport can be.” 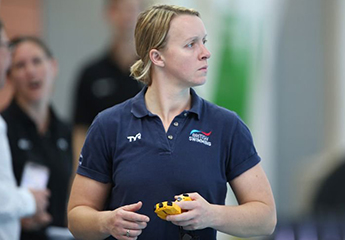 Katherine highlighted Mel’s flexibility as a coach charged with continuing to motivate an athlete who had seemingly won it all.

She said, “After the incredible success in 2016, they really planned out what they wanted to do until 2020, which turned out to be 2021, how to keep him focused and interested. How to set the goals for him and how life changes; he’s now a father with a family. As a coach you must constantly adapt and change with your athlete.

“I think Mel has done an incredible job. She was a phenomenal athlete and she is turning into an equally, if not more, phenomenal coach.”

Katherine, who had to wait until her 4th Games to claim gold, can empathise with the emotional rollercoaster ridden by Tom Daley. She underlined the importance of Jane, who moved to the UK in 2014 to coach him and revealed she banned talk of winning gold in the lead-up to the delayed Games.

She said, “You have such an incredible appreciation of just how tough it is to win the Olympic Games and how rich a reward it is when you finally do. It’s fabulous and that’s such an emotional story. He and Jane have this incredible relationship, very close and very supportive.

“But not always easy. They push each other as hard as anyone would. They have such a tight bond.”

Both coaches generously took time out of their Tokyo preparation to take part in UK Sport’s Female Coaches Leadership Programme, which is funded by The National Lottery. The programme partners up-and-coming coaches with mentors at the top of their game.

Katherine said, “When we saw how few female coaches we have, especially at Olympic and Paralympic level, it was really striking and it just felt that shouldn’t be the case. There’s no reason why brilliant women can’t become brilliant coaches and I think the more stories we can tell, the more examples we can give, the more people who will talk about their experience, then the more people will hopefully think this is an option I can do and would like to do.”

No one does more to support our Olympic and Paralympic athletes than National Lottery players, who raise around £36MMillion each week for good causes including elite and grassroots sport. Discover more about how playing The National Lottery supports Team GB’s athletes by visiting www.national-lottery.co.uk/tokyo2020 and get involved by using the hashtags: #TNLAthletes #MakeAmazingHappen.