In a year dominated by the impact of the coronavirus on communities across the UK, The National Lottery’s response to the crisis was truly wide reaching.

Thanks to National Lottery players and the £30MMillion raised each week for good causes, an extraordinary £800MMillion of funding was targeted directly at charities and organisations affected by the pandemic. As well as supporting food banks, groups combating loneliness and isolation and those supporting the elderly and veterans, there was much needed help for organisations in the arts, heritage and sport. 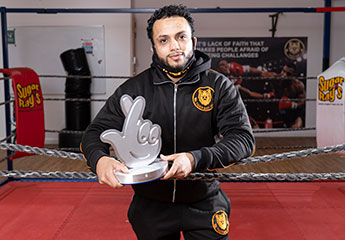 The heroic efforts of some of those who made a difference in 2020 was celebrated in November by The National Lottery Awards. This year’s Awards recognised the work of people like Wasem Said, the founder of Cardiff’s Tiger Bay Amateur Boxing Club, who organised a team of young volunteers to distribute food to vulnerable, shielding families.

Further recognition of people at National Lottery-funded projects who worked tirelessly during the pandemic came when 8 outstanding volunteers from the heritage sector had their pictures projected onto Stonehenge. Meanwhile, 6 iconic sporting venues were renamed for the day in honour of unsung grassroots sports volunteers.

There were plenty of big winners in 2020: a total of more than £4 billion was paid out in prizes and 817 lucky players won prizes of more than £50,000. Of the big winners, an astonishing 391 were worth £1MMillion or more, meaning there was at least a new millionaire made every day.

In December, almost 2 years on from her win, Frances Connolly revealed she had given away around £60MMillion of her and her husband’s £114MMillion EuroMillions jackpot. Frances, who wrote a list of 50 families to help immediately after she won said, “I have had more joy from changing lives than buying jewellery.”

Analysis of all the 2020 winners reveals that key workers were among the people most likely to win a jackpot. Those working in engineering and manufacturing represented the largest group of winners and drivers – bus, taxi and delivery – were in second place along with people working in the administrative and secretarial sector.