Frances’ joy at giving away half of £114.9MMillion win

Frances Connolly has been buying Christmas presents early this year – 1000 gift sets of toiletries, 30 computers, 20 laptops and dozens of internet dongles. It’s the sort of shopping list you might expect from the winner of a £114.9MMillion EuroMillions jackpot. But Frances’ purchases are not for her own family; they’re gifts for people who will be in hospital on Christmas Day as well as young carers living in poverty. It’s a characteristically generous gesture from a winner who — alongside husband Patrick – has given away more than half their fortune to help others.

Frances’ efforts to ensure others share in her good fortune began just hours after she won the jackpot on 1st January 2019. She drew up a list of 50 friends and family members she wanted to help out – a gesture that has grown into one of the most extraordinary giveaways ever.

A scrapbook given pride of place in the couple’s 5-bedroom home contains thank you cards from scores of people Frances has never met, but whose lives she has changed. They range from teenagers to a grateful 85-year-old. 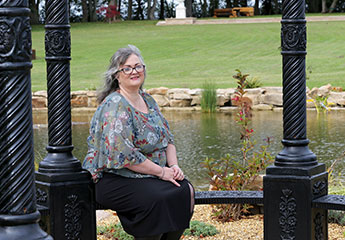 Frances, 54, said “I have had more joy from changing lives than buying jewellery. I knew from the start that I’d never become part of the jet set. Hours after winning the jackpot, I got up and packed away my Christmas decorations – because I knew I wanted to use them again the following year.”

After winning the jackpot, Frances had her heart set on buying a bungalow. She was astounded when an estate agent – who had learned of her good fortune – turned up with a brochure for a castle. The second home he showed her was a 15-bedroom stately home that came with an entire village.

Frances said, “We didn’t want to be lord and lady of the manor, we just wanted a comfortable home. In the end, we went to see just two houses. This was the second, and it felt like home immediately.”

Their new house, set in five acres of land, includes a tennis court and swimming pool in the grounds.

The festive season is another opportunity for her to help others. She has bought 1000 gifts for patients who will be spending Christmas Day in hospital as well as computer equipment for a group of young carers who would otherwise have faced a bleak Christmas.

Frances said, “Patrick joked for years that if we ever won the Lottery, he’d take away my mobile phone and never let me use the computer again because I’d give away the lot. But I’ve taken real joy from helping other people out.”

Looking to the future

That joy is mixed with a determination to maximise the impact of her generosity. When she and Patrick, 56, discovered that if they died within 7 years of making a gift, the beneficiary would be hit with 40% tax, they took out insurance to protect them. Frances said, “While we’ve helped so many people that the insurance won’t cover everyone, we’ve left extra funds so they won’t have to pay out.”

The couple were living in Moira, Northern Ireland at the time of their win. They had played The National Lottery for years using a mixture of family birthdays, but it was a random Lucky Dip ticket bought online at the last minute on 1st January 2019 which changed their fortune.

Celebrations with a cup of tea 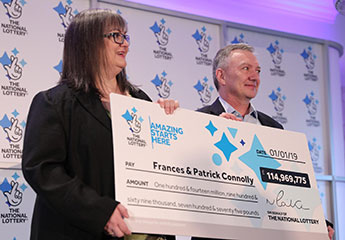 Frances can clearly recall the moment her husband went online to check the results. She said, “He checked and double checked, then he said ‘I think I’ve got some good news for you: we‘ve won'. I asked him how much we’d won, and he said ‘No you don’t understand – we’ve WON!’ He turned his laptop around and I could see £114MMillion.

“We sat staring at the laptop and when the news sunk in, we had a hug and I said ‘I’ll put the kettle on.’ So we celebrated with a cup of tea.”

Frances’ refusal to lavish money on herself extends to the car she drives. For her birthday last year, Patrick treated her to a second hand Jaguar that cost £2000 – the same model she’d owned more than a decade earlier. She said, “We’ve no need for supercars, and I’m so proud that our daughters also drive second hand cars. It’s something that does the job, and there’s no need to be flash.”

Have her family Christmas celebrations changed much since her win? She said, “My grandchildren will be getting bigger boxes of Lego than before. But our same decorations are going on the tree albeit joined by a few new ones. We’re going to spend our usual quiet Christmas at home.”

One of the most precious gifts Frances has given this year – and the one of which she’s most proud – is helping a young refugee boy get to school.

A community group for young carers called Eastern Ravens told her about a 13-year-old refugee who was struggling to get to school because his family had been re-homed and his mother could not afford her son’s bus fare. Frances said immediately she would cover the cost of transport for the rest of his time at school.

She said, “The security of his friends and the familiar school where he is thriving is perhaps the best gift anyone could give this Christmas.”

Frances and Patrick have also launched 2 charitable foundations in the areas closest to their hearts. The first is in Northern Ireland – Frances was raised in County Tyrone and Patrick grew up in Belfast.

Frances said “We formed the Kathleen Graham Trust, in memory of my mother. She died the year before we won, but she was the most generous person I knew, and would give away her last penny to help others.”

The couple’s second foundation is in Hartlepool where Frances has lived most of her adult life. She said, “We formed The PFC Trust to help local people, but we were determined from the start that we wouldn’t be throwing money away. We wanted to help people to help themselves and for lives to actually change. We’d been given a gift with the Lottery money, and we wanted to share our good fortune with others.”

Helping out during the pandemic 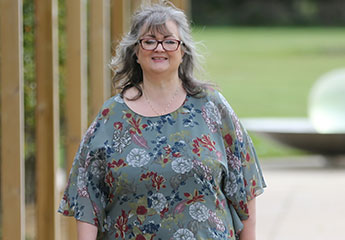 That generosity helped one man take his young daughter on their favourite countryside walk again after an accident left him in a wheelchair. Frances said “He used to like hiking with his little girl, who was about 4. I paid for special wheels for the wheelchair, so he could take her out once more – making that happen was the most fantastic feeling."

The coronavirus has given Frances more opportunities to help out. She said “I immediately wanted to help people who found themselves isolated and cut off from their loved ones. I was approached by The Teesside Philanthropic Society who were purchasing electronic tablets, so we sponsored them, then bought another 100 for Hartlepool and 100 for Northern Ireland, to be given out to care home residents, Macmillan nurses, young carers and women’s refuges, because the children living in temporary accommodation didn’t have access to computers.”

Frances describes herself as ‘unsentimental,’ yet one of her dearest possessions is a folder filled with thank you cards from people who have benefited from her gifts and support. She said, “I’ve kept every single thank you card – more than 300 in total – and they move me every time I look through them. The cards are a reminder of the power of the National Lottery and how it has changed not only our lives, but other people’s too.”