Hospital workers’ EuroMillions win is just what the doctor ordered

A syndicate of hospital workers who call themselves ‘The Pharmily Crew’ is celebrating after scooping a £118,044 prize on EuroMillions. 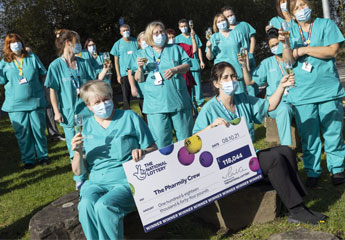 Most of the 53-strong syndicate work in the pharmacy department of Swansea’s Morriston Hospital. The members – aged from 20 to 63 – will each take home £2,227.26 from their win.

Pharmacy technician Kim Owen, who has worked in Morriston Hospital for 18 years, is the syndicate leader. She regularly buys the group’s tickets for both Lotto and EuroMillions.

Kim said, “I usually end up buying the tickets as and when but on the day of this draw, I decided I was going to wait and buy all the tickets at once. I felt like doing something a bit different might bring us a bit of luck – and I was right!”

When Kim checked the numbers after the Friday, 8th October draw, she struggled to believe the Pharmily Crew had won a big prize. She said, “I asked my husband to triple check the ticket and as soon as I was sure it was true, I tried to call a few people to share the good news. Because it was late, no one picked up, so I put it on the WhatsApp group instead. People were so excited and there were others, like me, who just couldn’t sleep so my phone was going off with messages throughout the night!”

Like all key workers, the members of the syndicate have had a challenging 18 months, having worked solidly throughout the pandemic.

Kim said, “It has been a scary time for all of us and for us to share this win after having all faced the same challenges, makes it extra special. I hope we’ll be able to do something together to celebrate, but we’ll see. People come from all over to work in the hospital so it’s tricky to get everyone in the same place at the same time, especially at the moment.

“This is a lovely amount to win and hopefully it will come in handy for lots of people. After the last few years, I will definitely be putting the money towards a holiday.”