Andrea Law and her husband Mike are still coming to terms with scooping a £2MMillion Lotto jackpot prize. But the Worcestershire couple are very clear about their intentions: using their amazing windfall to make indelible memories for their family. 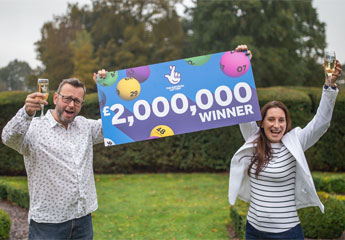 Andrea, a marketing and communications manager, said, “It isn’t about houses and cars, it's about staying grounded and having a wonderful time with the people we love.”

Andrea, 43, was suffering with a tooth infection when she woke up the day after the Wednesday 13th October Lotto draw. She said, “I was in bed poorly when I checked the ticket on my National Lottery online account. I looked at my phone and saw the incredible winning amount and just put it down – I didn’t know what to do, I was so shocked. Then my son came in asking where his school uniform was so I was straight up and back to reality. I sorted him out for school and he went off with my husband and I went back upstairs and checked the ticket again.”

Andrea didn’t tell Mike, 50, straight away as he had to drive her children to school. She said, “He would have ended up in a hedge, daydreaming about the win if I had told him before he left! It felt like the longest journey ever as I waited for him to get home – and the kids’ school is only 4 minutes away!”

After the longest school run in history, it took Andrea some time to convince her husband the win was real.

She said, “When Mike finally got back, I told him I had something to tell him – my hands were shaking and he looked worried. When I said I’d won on The National Lottery, he just couldn’t grasp it.

“I logged on to my National Lottery account on my phone to show him but he still didn’t believe me. When I phoned the National Lottery Line and the representative said ‘congratulations’ I started to cry – I was just completely overwhelmed. Mike only believed me after that phone call! For the rest of the afternoon we sat on the sofa looking at each other. Mike kept looking at me and grinning saying, ‘Oh my God, you’ve won the lottery!’”.

The couple initially decided not to share news of their win with anyone, but after taking a short break with their 2 young boys, they decided this kind of news was worth sharing.

Andrea said, “We went to the Lake District at the start of half term as a family for a belated birthday trip for Mike. It was nice to go away just the 4 of us and get our heads around the win, which is when we decided we would share our news. It was such a relief to tell people.

“My sister’s reaction was priceless – she screamed the place down! Her fiancé thought I was winding him up, as did my dad. When I told mum I had something to tell her, she asked if I was pregnant! Everyone is just delighted for us.”

With the win confirmed and the money in the bank, the couple are making plans for the future. The family are planning a holiday to Greece next summer and hope to return to Los Angeles – where they lived for a while – in the future.

Andrea said, “My youngest is learning all about volcanoes and he is desperate to see Mount Versuvius so we might add Italy to the list too.”

Do the children understand their parents’ good fortune? Andrea said, “Our youngest doesn’t fully appreciate what’s happened, but the older one is very excited – he did a little dance when we told him we had won. We have said to the boys we are going to live as usual but we can go on more holidays and make amazing memories.”