A security guard said he “won twice on the same day” after landing the top prize on a National Lottery Scratchcard before going on a long awaited first date with his girlfriend. 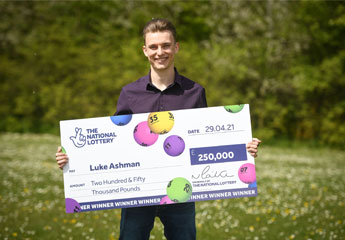 Luke Ashman, from Dudley, West Midlands, said he started to shake when he realised he had won £250,000 on The National Lottery’s Multiplier Orange Scratchcard, which he bought before getting ready to go out for date night.

The 22-year-old said, “I scratched a diamond, then a win symbol – I saw £250,000 but wasn’t sure whether it was a full stop or a comma. When I double checked and saw I had won the top prize my heart was thumping and I literally started to shake.”

Luke’s journey back home from the shop is a bit of a blur. He said, “I stumbled along the drive, opened the front door and started to shout out to whoever was home.”

After enlisting his mum’s help to double check the Scratchcard for him, Luke called Camelot to confirm the win before immediately sharing the amazing news with his dad and 3 brothers.

But Luke’s lucky day continued. After waiting for months until lockdown rules allowed for a trip to pubs and restaurants, that evening Luke was able to take his girlfriend out for the first time – and share his news.

Luke said, “That night we went out for a meal, I ordered a bottle of Prosecco and we celebrated an amazing day of both a National Lottery win and a first date. You could say I’d won twice in one day.”

Plans for the win include a Ford Mustang car and family celebrations. Luke said, “It’s my birthday in a couple of weeks. It’s then my Dad’s 50th and my 3 brothers have special birthdays too, so we’ll wait until after the 21st June to get together with lots of family and friends and have a fantastic party.”