A group of National Lottery winners from Wales and South West England have teamed up with a Cardiff hospice to help its inspirational fundraising campaign, Forever Flowers, flourish. 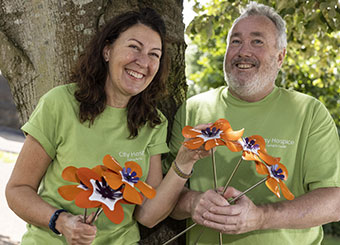 The team of winners first got involved with City Hospice in the run up to Christmas 2020. They produced festive hampers for the hospice staff to thank them for their incredible hard work during the first 9 months of the pandemic. Since then, the winners have been looking for a new way to help the charity.

When they heard about the hospice’s Forever Flowers campaign – an initiative giving people the chance to celebrate the lives of lost loved ones by purchasing colourful metal flowers from a stunning display of more than 1400 ‘blooms’ in the grounds of Cardiff Castle – they were keen to get involved.

In August 2021, eager volunteers were on duty at the Forever Flowers display, meeting visitors, guiding guests to the right location and explaining the campaign to members of the public. They also sold City Hospice merchandise to further assist fundraising. 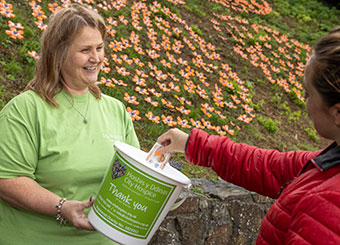 The winners, who in ‘normal’ times would regularly get together to volunteer for charities that have benefited from National Lottery funding, couldn’t help out en masse because of Covid-19 precautions. Instead, they staggered their contributions over a number of days to ensure that everyone stayed safe.

Faye, a registered mental health nurse, said: “After the last 18 months, it is so important that people have an outlet for their grief, and the Forever Flowers campaign really resonated with Richard and I as playing an important role in people’s lives."

Lyn, who travelled up from New Quay, Ceredigion with her husband Ian to volunteer for the day, added, “We jumped at the chance to get involved with this important campaign. No one has been immune to the difficulties of the past year and a half. Forever Flowers was a great way of bringing people together." 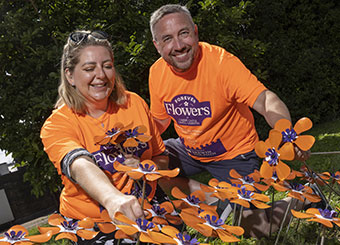 The Welsh winners were joined by Tina and Ian Burgess from Bristol, who were part of the winning Banfield Syndicate which scooped £18MMillion in 2018. Denise and Paul Hardware from Street in Somerset, who won £4.9MMillion in 2007, also took part.

Cardiff’s City Hospice provides palliative care for 550 patients with life-limiting or terminal illnesses. It also provides services such as counselling and bereavement support. The Hospice has received a number of National Lottery grants, including £10,000 of funding towards their Patient MiniBus Fund in January 2019.

Liz Andrews, CEO at City Hospice, said, “We were overwhelmed by the kindness of the National Lottery winners at the end of a very difficult year last year and when they said they wanted to work with us again we were thrilled.”