As a fifth generation black Liverpudlian, Louis Julienne understands just how important it is to know your history. 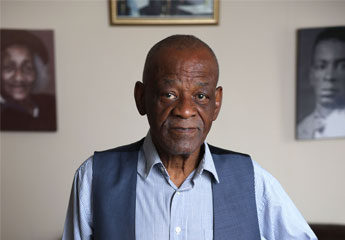 Elizabeth Clark, his great, great grandmother, was a free slave who left North Carolina, travelled to the Bahamas then made a home in Liverpool. She became a servant in the port city and began the “dynasty” of which 75-year-old Louis is a proud member.

While Louis was well aware of his own family’s history, he discovered the stories of black people who lived and worked in a city – once a hub for the transatlanic slave trade – were largely untold. That’s why, 7 years ago, he co-founded the Heritage Development Company Liverpool (HDCL) with fellow trustees Albert Fontenot and Ray Quarless. The project, which is supported with National Lottery funding, is devoted to bringing Liverpool’s black history to life.

Louis said, “It [the dearth of black stories] disappointed me more than anything. There was nothing in the libraries and the museums. We kicked that off really and now it’s a history that has become far better known.”

HDCL’s first exhibition told the story of Liverpool’s black musicians; a talented and diverse group of people who had been overlooked in a city synonymous with The Beatles. The exhibition drew a line from the 18th century, when black entertainers played to packed audiences in the city’s hotels and music halls, to the reggae, funk and soul acts of the 1970s and onwards to today’s pioneering hip-hop and electronic artists.

Louis is just one of the local heroes doing amazing things with funding made possible by National Lottery players. Thanks to you, more than £30MMillion for amazing projects like the HDCL is raised every single week.

Now, Louis’ effort has been recognised with a well-deserved nomination for a 2022 National Lottery Award. Describing his excitement at being nominated, he said, “I’m very pleased about that. It really helps to put the HDCL on the map.”

Prior to the pandemic, HDCL curated another successful exhibition called Black Punch. It told the story of Liverpool’s black boxers and their extraordinary success in the face of prejudice. Harry Brown, whose career ran from 1897 to 1905, was just one black fighter prevented from fulfilling his potential by the British Boxing Board of Control’s ban on black boxers fighting for the British title.

Louis said, “Liverpool has an amazing boxing tradition. We discovered that 33 World, European and British champion black boxers all came from one small area, L8 (Liverpool 8). Boxing was a way out of poverty and before the advent of football mania it was the preferred sport for a lot of kids.”

Black Punch was extremely well received, but plans to tour the exhibition were put on hold when the first lockdown was announced. HDCL was faced with imminent closure if funds could not be raised to save it.

Fortunately, the project’s future was guaranteed with the help of a grant from The National Lottery’s Emergency Fund. Louis said, “The National Lottery funding has brought us back from the brink, allowing us to amplify the stories of our community that need to be told.”

Do you know a local hero? Nominate them for a National Lottery Award. Visit: www.lotterygoodcauses.org.uk/awards