Dominic ‘Dom’ Warren has barely had time to draw breath since his tireless work collecting surplus food and redistributing it to people in Hastings was recognised with a 2020 National Lottery Award.

The 36-year-old founder of Dom’s Food Mission said, “We’re still running at 100 miles an hour distributing food every day of the week. There isn’t a day when we’re not working, but I absolutely love it.” 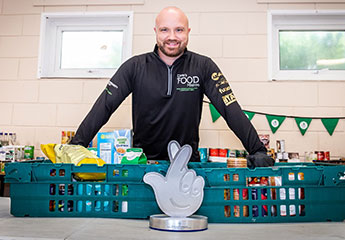 Indeed, the project Dom and his wife Alexandria conceived on a notepad almost 6 years ago, is busier than ever. Between 1st January and 1st March 2021, it collected 28.564 metric tonnes of surplus food – the equivalent of 83,000 meals – and redistributed it via 5 food hubs in Hastings and drop offs at refuges, hostels and schools.

By the end of 2021 Dom expects to have redistributed enough surplus food to make more than 500,000 meals.

The National Lottery Awards are a chance to celebrate the inspirational work of ordinary people and projects who do extraordinary things with the help of National Lottery funding. Last year, the focus was on people who were going above and beyond to support their community and there were more than 5000 nominations made.

Dom said it was “amazing” to get the call confirming he and Alexandria had won the Environment category. The publicity created by the Awards, and a widely-shared National Lottery video explaining how Dom’s Food Mission works, has increased interest in the project locally and led to enquiries from groups in Italy, Spain and Denmark eager to replicate its success.

Now it’s time to put a new group of local heroes in the spotlight. Nominations for the 2021 National Lottery Awards have opened and we want you to nominate the people you think should win an award in 5 categories: Art, Film and Culture, Sport, Community/Charity and Young Hero (Under 18).

We also intend to run a public vote to determine 'The National Lottery Project of the Year'. Winners in each category will receive a £3,000 cash prize for their organisation and a coveted National Lottery Awards trophy.

Dom believes it’s really important to nominate the people and projects doing inspirational things in your community. He said, “It’s vital because there are some incredible people out there. Nominating them for an award shows that you care about them in the way they care for so many others.

“I didn’t start Dom’s Food Mission for a pat on the back or my name in the paper; I wanted to do more because I knew I could do more. There are loads of people out there that are doing that and they deserve an award, all of them.”