When Kylie Grimes’ surgeon visited her after a gruelling 11-hour operation, he assumed the then 18-year-old would have a lot of questions. After all, she’d just learnt she was paralysed below the chest and would never walk again. 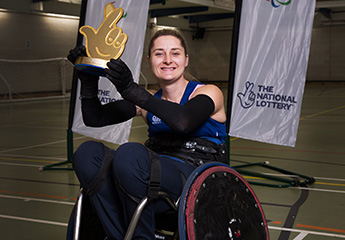 But he didn’t expect her first question to be, “What sport can I play?” The surgeon admitted he had never been asked that question before; most people wanted details about their operation or their rehabilitation. Kylie said, “Nah, mate, I just want to play sport.’”

15 years on, not only has Kylie found a game she loves in wheelchair rugby, but at this summer’s Paralympic Games in Tokyo she became the first woman to win a gold medal playing the sport. Now the icing on the cake for her and her teammates is being named Paralympians of the Year at The National Lottery Awards 2021.

Kylie, from Farnham in Surrey, is among more than 1,000 elite athletes funded by The National Lottery through UK Sport’s World Class Programme. The programme allows athletes to train full time, have access to the world’s best coaches and benefit from pioneering technology, science and medical support.

Kylie, the sole female member of ParalympicsGB wheelchair rugby squad, said, “I’ve been saying for years that wheelchair rugby is the most amazing sport that not enough people have watched. But during the summer’s Games so many people started to send messages on social media to say they’d seen the semi-final and the final on TV and were willing us all the way, which was brilliant. Then, for the public to vote for the team to win this award is a bit mind-blowing.” 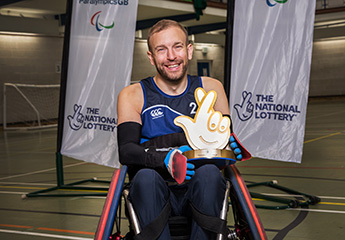 The road to Tokyo was rough, but the team were determined not to let the pandemic set them back. Kylie said, “It was the hardest Games to prepare for. When lockdown first happened we didn’t have sports halls and couldn’t meet, but we knew the only way we’d win gold was to keep training. We all spent long, cold months alone, wrapped up in coats and scarves, doing sprint sessions in parks and on tennis courts.”

All that hard work paid off handsomely in Tokyo. Kylie said, “Being the first woman to win gold means even more than the medal itself. Knowing that youngsters now have a role model and can say, ‘I want to be like Kylie one day’ makes me so emotional.”

Kylie and her teammates are already looking to the future. She said, “Wheelchair rugby is now National Lottery funded all the way to the Paris 2024 Olympics. It’s going to help the sport grow and it’s going to hopefully keep us on a winning streak so we can bring home more medals. It’s phenomenal!”