Vic’s song in the key of life helps family grieve

Vic Simborowski didn’t get to meet his new grandson who was born just three weeks before Vic died at the age of 70. But thanks to The Swan Song Project – a National Lottery-funded organisation that helps people nearing the end of their life write and record a song – Vic’s daughter Ellie knows that one day she will be able to introduce her son to his grandfather.

Ellie said, “I know that Dad was happy knowing that my son had arrived safely. When he is older, we can listen to the song together and I can tell him about his grandad.”

Vic’s song, Shades of Love, was written at a hospice in Leeds with the help of Ben Buddy Slack, a 31-year-old musician who founded The Swan Song Project in 2017. The heartfelt ballad expresses Vic’s love for various members of his family and explains how each one of them shaped his life.

Vic’s wife Corrina said the recording is a powerful memory of her husband. She said, “I listened to it several times after he died and found it comforting. I also had it played at his funeral as the closing music and it was very poignant for everyone there to hear his voice.” 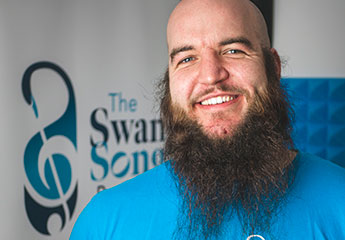 Ben said the songwriting process means different things to different people. Some take a lighthearted approach; others want to tell people exactly how much they love them. But everyone who takes part finds it therapeutic and deeply rewarding.

He said, “When people are approaching the end of their life, everything tends to be about their illness. Writing a song is a chance to reflect on and reconnect with who they are besides someone with a terminal illness. Sometimes it’s a chance to clarify their legacy and tell people exactly how much they love them and it’s also a positive distraction during difficult times.”

Ben has written songs with 65 people since he founded the project. Their relatives often contact him and say how much the songs mean to them and he imagines the recordings will be a comfort at Christmas – a time when a loved one’s absence is keenly felt.

He said, “One of the things I love about the songs is that you can revisit them at any time. If people are missing someone at Christmas, the song makes it feel as if they’re there in some way.”

Ellie said her reaction to hearing Shades of Love was pride that her father could write something “so lovely”. She said, “I was impressed with the lyrics and the music; it was quite emotional. He didn't sing very much at home, especially since his illness had progressed so it was a nice surprise to hear his singing voice.”

You can hear Vic Simborowski and Ben Buddy Slack performing Shades of Love in the video below.