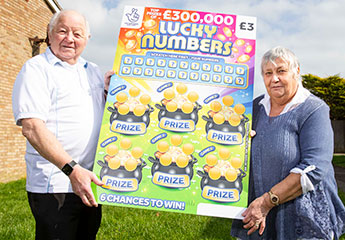 The 74-year-old was expecting to celebrate his birthday much like many others – with his wife Iris, 69, by his side and a slice of cake, but instead received something a little more life-changing. He said, “At 74 I’ve celebrated a few birthdays, but this has definitely been the best present!”

Reginald and Iris’ National Lottery-winning adventure began earlier in the week, when they headed to their local Tesco Express. Reginald said, “As we pulled up at the shop, I joked to Iris that it was ‘Pension day’ and we could watch the money come in with one hand and out the other almost immediately. We both had a little chuckle before popping to Parsons Bakery to pick up some donuts and then into the supermarket for the papers and 3 National Lottery Scratchcards.”

Reginald added, “We live a relatively quiet life and don’t drink or smoke, so we think of our Scratchcards as our treat, a bit like the donuts!”

With their goodies in-hand, the pair headed home and while enjoying their morning coffee, Iris played the Lucky Numbers Scratchcard. Reginald recalled the winning moment and said, “I shouted, and then I think we were in shock because we both just sat watching the telly for another 30 minutes in silence!”

After their half-hour hiatus, Reginald and Iris called up The National Lottery to get their Scratchcard validated and then the lucky couple informed their children of the news.

Plans for the winnings include some treats for their children and grandchildren as well as a new car for Reginald and a couple of additions to Iris’ Pandora collection. Reginald said, “Other than that, there may be a few more donuts and a few more Scratchcards to keep us entertained, but one thing’s for sure, the family are going to be hard pushed to better this year’s birthday present!”