Rub a tub as Mark and Sara scratch £1MMillion

Mark and Sara Plowright aren’t waiting to take the plunge into life as millionaires. The Doncaster couple have been enjoying regular dips in a new hot tub after winning £1MMillion on a National Lottery Scratchcard. 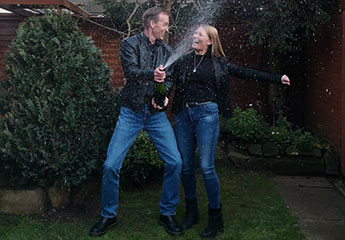 A luxury hot tub for the garden was top of the shopping list for Mark, 47, and Sara, 42, after the Scratchcard they bought at a shop in Auckley delivered the whopping windfall. But when they discovered their dream hot tub couldn’t be fitted for a few days, Mark purchased an inflatable one to tide them over.

He said, “We haven’t left it since it got installed!”

Mark, a concierge at Robin Hood Airport, was picking up some essential supplies after work on 21st January when he decided to buy a Scratchcard. He said, “I unpacked the shopping and placed the Scratchcard on the table, thinking nothing more of it. I took our dog for a walk, got back and made a cup of tea and waited for Sara to get home.

At that point Sara, a training coordinator, realised that part of the card hadn’t been scratched off. Mark said, “She got a pen and paper, added it up and thought we had won £750,000, which we were beyond shocked about. We immediately took it to the shop to get it checked and they told us we needed to call Camelot. When we did, Camelot told us that we were in fact now millionaires!” 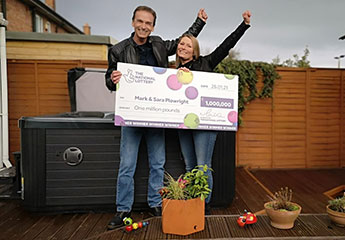 Mark, who prepares private and chartered planes for wealthy fliers including celebrities, is looking forward to getting a taste of the high life himself. He said, “After working with luxury planes everyday, I have always dreamed of experiencing flying first class on a long flight – and that’s what we will do, as soon as it’s safe to do so.”

The couple also have some exotic destinations on their wish list for when it becomes safe to travel again. Mark said, “A few years ago, before I met Sara, I took a trip of a lifetime and went travelling around the world. One stand-out place that I want to revisit and take Sara to is Fiji. Sara is also keen to swim with pigs in Barbados so the Caribbean is a must!”

In the meantime, there’s the new hot tub to look forward to and plans for a ‘Man Cave’ for Mark. He said, “I have a lot of original Star Wars memorabilia so a Man Cave to house it all in is a must, along with a pool table and bar.”