John Reid, a pub relief manager, popped out to pick up some lemons and certainly wasn’t left with a bitter taste when the National Lottery Scratchcard he bought at the same time made him £250,000 richer. 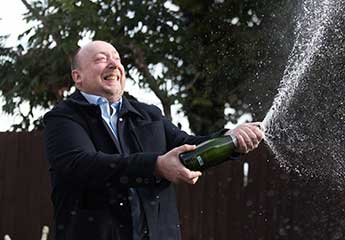 John, 61, was holding the fort at the Railway Tavern in Bexley when he bought the Scratchcard and discovered his win. He said, “I’ve been in the pub game for more than 20 years so I’ve heard many tales about life’s highs and lows and among them I’ve heard of people who had won a few quid on The National Lottery. Maybe it was those stories, or just dreaming, but I always believed I was going to have a good win on it. Looks like I was right!”

John’s win came about thanks to a shortage of lemons at work. He said,

“After lunchtime service I hopped on the bus to the local supermarket to pick up some fresh lemons for the bar and a steak pie for my supper. I also treated myself to a couple of Triple Jackpot Scratchcards which, realising I needed to get back to the pub, I stuffed into the bottom of the carrier bag amongst the citrus fruit and my pie. I shudder when I think that I was casually carrying £250,000 about in a carrier bag -– what if my meat pie had exploded!”

Thankfully John’s shopping stayed in one piece long enough for him to play his Scratchcard. He said, “I went into the flat above the pub for a sit down, before the early doors lot came in about 5 o’clock, and played 1 of the Scratchcards but nothing. Then, a bit absentmindedly, I played the second one, revealing £250. I was delighted and decided my steak pie was a fitting celebration for a meaty win like that. It was only a little later when I put my glasses on to watch the news and took another look at the winning scratchcard, that I realised there was a KThousand next to the £250.” 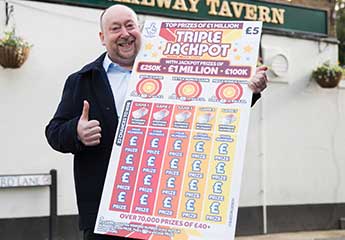 Seeing he’d actually won £250,000, John let out a very loud “woo hoo”, followed by a hefty shout usually reserved for last orders, both of which brought the barmaid Karen running to the bottom of the stairs to check he was alright. John said, “I asked Karen to check it looked right and then to be doubly sure I went to the convenience store next door to check it on the terminal. When the staff told me I needed to call Camelot it started to feel real.

“I made the call in the pub and sat in the bar with a few of the regulars – in a socially-distanced way, of course! – as I waited for the call back from Camelot to confirm it was a winner. That was a tense moment until it was given the okay and then the whole pub let out one hell of a cheer. What a moment!”

With his win confirmed John, who lives in Southall, could be forgiven for calling last orders on his 23-year career in the pub game but he has no intention of doing that just yet. He said, “I haven’t really made any firm plans yet but I’m definitely going to carry on working. It’s certainly a tricky time to be running pubs but I’ve been here for the good times and I’m going to carry on in the trickier times too. Besides, I’d be bored without the banter and I’m sure the regulars will all have plenty of advice about what I should do with the money!”

John has his own ideas about what to do with his winnings. He said, “In the short term, I may buy myself a new car, perhaps a Jeep, and longer term look at buying a property but for now, I’ll just bank the money.”