Sunderland mum Louise Tate has plenty of reasons to celebrate after winning a £100,000 top prize on a National Lottery Scratchcard just days after receiving the all-clear from melanoma. 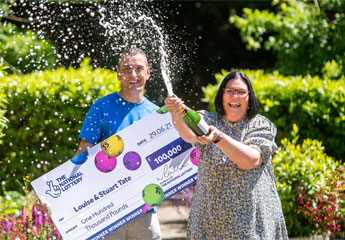 Louise, 42, developed a melanoma behind her eye during lockdown. As part of her treatment surgeons had to remove her left eye, replacing it with a prosthetic.

But just days before the pharmacy assistant popped into a supermarket and bought a £2 National Lottery Scratchcard, she had been given the news she had prayed for: an all-clear diagnosis for her melanoma.

When Louise scratched off the National Lottery Lions Share Doubler Scratchcard she was astonished to see she had won the top prize of £100,000.

The icing on the cake was the fact that the winning Scratchcard featured 3 elephants. Louise had developed a love of the animals during her melanoma treatment. She said, “The last 6 months have been incredibly difficult at times and my family and friends have been hugely supportive and rallied round. At one point some friends suggested that elephants bring you luck. 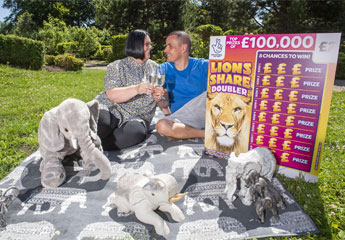 “I felt I needed enormous amounts of luck so I started to collect them – every time I went out I would try to buy an elephant and friends would arrive at the house with elephant ornaments for me too. I now have almost 30 throughout my home!”

Louise had a hard time convincing her husband Stuart, 45, she had won £100,000. She said, “He just thought I was winding him up and kept saying ‘you have got it wrong’. I kept saying, ‘no, I haven’t, you really must stop the car’!”

When Stuart pulled over both he and Louise struggled to come to terms with their good luck. Louise said, “I don’t know who was more shocked. I think we both went through every emotion, from joy, to shock to breaking down in tears. Neither of us could believe it. In fact, I don’t think it was until we called Camelot and then saw the 6 figure sum land in our bank account that we started to believe this really was happening and totally true!”

Louise intends to treat herself to a gold elephant pendant and there are plans for some home renovations and a family holiday in Florida once travel is permitted.