‘Pop to the shop’ wins Sara £1MMillion on Scratchcard

Sara Thomas, a care home assistant from Treharris, South Wales, is hoping to get behind the wheel of a brand new Jeep after winning £1MMillion on The National Lottery’s 50X Scratchcard. 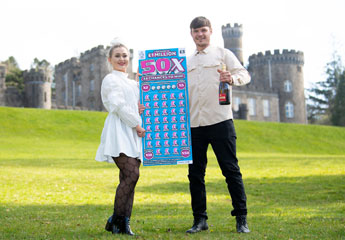 The 26-year-old is about to take her driving test and has her eye on a smart all-wheel drive as her first set of wheels.

Sara bought her winning Scratchcard on a work break. She said, “I popped to the local shop to buy some bits and grabbed a Scratchcard whilst at the till. I don’t buy them often but I did get one a few weeks ago as a treat and my partner Sean jokingly said to me, ‘don’t buy them, you won’t win anything!’."

Sara took the Scratchcard back to work and was “gobsmacked” to discover she had won £1MMillion. The next challenge was getting people to believe her.

She said, “I called the girls I work with and they thought I was joking. No-one believed me and even I didn’t believe it really. I asked one of my colleagues to call The National Lottery for me with the phone on speaker as I thought it was a prank and I didn’t want to embarrass myself. When Camelot confirmed the win we were all screaming. I could not believe it, it still hasn’t sunk in.”

Sara had an equally hard time convincing Sean, 28, and her father she had won the top prize. She said, “When I spoke to Sean and my dad they thought I was joking – my dad said he needed to see it to believe it was real. They both said I should leave work for the day but we were short staffed and I didn’t want to let the girls down so I stayed until 7pm. The rest of the day was a bit of a blur.”

Like many people, Sara has been working hard during the pandemic. As well as shifts at the care home she has been home-schooling her 5-year-old daughter and taking care of her 3-year-old son. 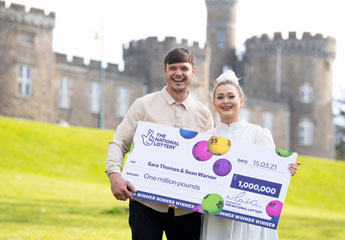 She has no plans to give up work and is focussed on cementing her family’s future. She said, “I love my job. The patients appreciate you being there for them when they can’t see their family and it’s just really comforting knowing that you are putting a smile on their faces. We have great banter! It’s nice to know you are helping someone and making a difference. It has been tough, but I wouldn’t change it.”

The couple are planning a family holiday when restrictions allow – an opportunity to take their youngest on a plane for the first time.

In the meantime, Sara is simply enjoying the sensation of becoming a millionaire. She said, “Everyone is just really pleased for me and it feels really good. Sean’s cousin won £70,000 on a National Lottery Scratchcard a couple of years ago – I am starting to think Sean might be the good luck charm!”