A couple from the Kent village of Ash were lost for words after winning the £300,000 top prize on a Scrabble Cashword Scratchcard from The National Lottery. 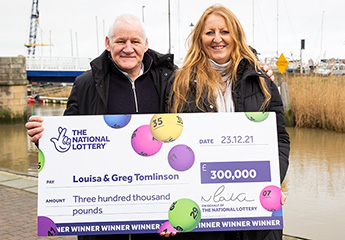 Louisa Tomlinson, 57, and her husband Greg, 62, had no idea they were about to enjoy a very special Christmas when they popped into a supermarket for their weekly shop in late December 2021. As they were leaving, Louisa remembered she had a free Lotto Lucky Dip to play from a previous draw. She handed Greg £10 and asked him to buy a couple of National Lottery Scratchcards.

Greg said, “There’s no special reason I chose two Scrabble Cashword Scratchcards, but I’m very pleased I did! Once we got home we put the shopping away and, with a cup of tea in hand, sat down to play our Scratchcards. I was busy with mine when Louisa said ‘I think I’ve won £10,000’. She paused, counted the number of words she’d revealed again, then said, ‘hang on, I think we’ve won an awful lot of money!’

“I looked at her Scratchcard and saw she had revealed 12 words which meant the top prize of £300,000. This sort of thing doesn’t happen to people like us so we checked, double-checked and triple-checked before I finally said, ‘I think we’d better call The National Lottery.’ When they confirmed the win, we burst into tears.” 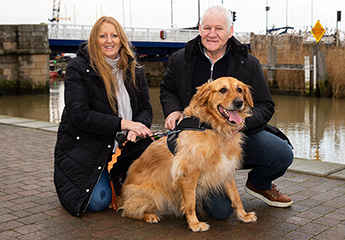 With their win confirmed, the pair signed the back of their winning Scratchcard and locked it away. The couple barely left the house for fear of losing it or having it eaten by Teddy, their beloved Golden Retriever.

Louisa said, “It sounds crazy but I was actually too scared to think about it, and wouldn’t even look at the filing cabinet. I think we were in a state of shock.”

The couple, who have been married for 22 years and have 5 children, are looking forward to creating some special family memories with their windfall.