Brian ‘in the pink’ after £500KThousand Thunderball win

Brian Courtney held on to a bottle of bubbly for over 20 years because he was convinced his National Lottery numbers would come up. Now, the 65-year-old factory worker from Weston-super-Mare has finally popped the cork after scooping the £500,000 top prize on The National Lottery’s Thunderball game. 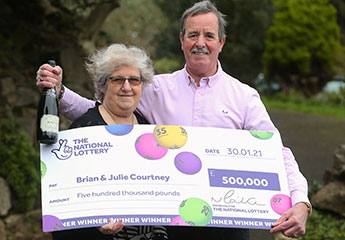 Always convinced he and his wife Julie, 62, would win big, Brian said, “We used to take part in a French exchange and in the early ‘90s we had a family to stay who brought us a very nice bottle of pink champagne to say ‘thank you’. When they gave it to us we said then and there that we’d keep it and drink it when we won The National Lottery. I think they thought we were mad, but I was sure that we’d be cracking it open one day to celebrate a big win!”

Now that day has finally arrived the couple are looking forward to spending more time together and plan to use some of the £500,000 windfall to travel around Asia, as soon as restrictions allow. Brian said the couple will also treat their daughters and grandchildren, as well as book themselves onto a cruise, when it is safe to do so.

Brian and Julie are celebrating their 45th wedding anniversary this year and hope to mark the occasion with a return to Weymouth where they enjoyed their honeymoon. 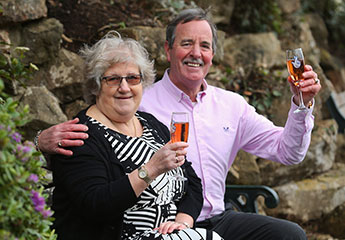 The couple have been playing The National Lottery since it started and have always used the same numbers – a mixture of birthdays, anniversaries and house numbers.

Brian is the second player from Weston-super-Mare to win on The National Lottery in recent weeks. Dan Fisher, 45, another resident of the seaside town, won £300,000 on a National Lottery Scratchcard in January.