A group of National Lottery winners has treated 39 young carers and their siblings to a giant circus-themed party in Blackpool. 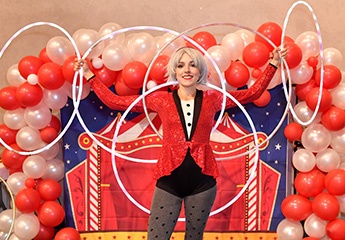 The event at Blackpool Tower gave carers from National Lottery-supported Blackpool Young Carers the opportunity to learn circus skills including juggling and plate spinning. The young people aged 5-17 also had the chance to take part in circus crafts, face painting, balloon making and test their skills on a bucking bronco!

One young carer, who looks after her mother and brother, said, “This was just the best day ever! I cannot believe I learned plate spinning! There were just so many great activities to choose from. I knew my mum was safe and it meant so much that she was actually able to be there with me, seeing me having fun.”

The kind-hearted winners who helped organise the event included Sharon and Nigel Mather from Bowdon, Cheshire, who won £12MMillion in 2010.

Sharon said, “Young carers can so often be forgotten about – it is absolutely incredible what these young people do day in, day out. Being a mother myself, this actually brings tears to my eyes just hearing some of their stories. 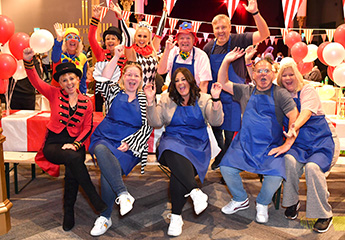 “I am so pleased that myself and the other winners here today have been able to play a small part in bringing some joy into their lives.”

Other winners joining Sharon and Nigel included Geoff and Hilary Bennette from Blackburn, who won a £3.5MMillion Lotto jackpot in 2011. Also helping out were Tracy Birkbeck from Penrith, who won £369,000 on Lotto in 2013 and Ruth Breen from Wigan, who won £1MMillion on EuroMillions in 2014.